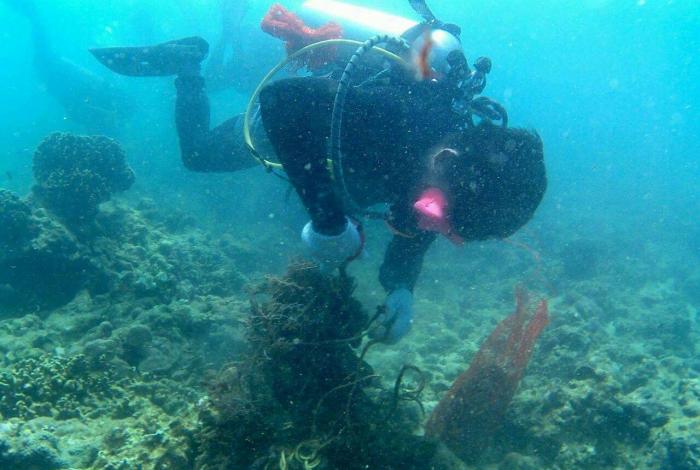 PHUKET: Coastal provinces in Thailand have been given a budget for marine debris management after Thailand was ranked as the sixth worst marine polluter in the world by the United Nations Environment Program (UNEP).

The UNEP is an agency of the United Nations that coordinates its environmental activities and assists developing countries in implementing environmentally sound policies and practices.

Region 6 of the Marine and Coastal Resources Department (DMCR) received an 800,000-baht budget from the Ministry of Natural Resources and Environment for marine trash collection in Phuket, Phang Nga and Ranong.

Laem Sai Beach in Phuket was the first to see action. On Saturday, 156 officers, volunteer divers, local fishermen, hotels, boat operators and students collected nearly 382 kilograms of wood, fishing nets, plastic and other types of trash from the beach (about 100kg) and the rest in the sea.

According to UNEP, about 1,800 tonnes of trash is added to the sea every year, of which 38 percent is plastic. Thailand is believed to contribute at least a ton of marine trash to the worldwide total, of which 66 per cent is generated from man-made activities such as tourism.

“Marine debris affects the whole ecosystem, including marine life and particularly endangered species. Every year, about 2 to 5 per cent of endangered species die from consuming trash,” said Suchat Rattanaruengsri, head of DMCR region 6.

“If the sea is polluted, the fish will also be affected. This will lead to a reduction in the number of fish caught and negatively impact the fishing industry.

“Additionally, it impacts tourism – if the sea is not pristine and all the coral is dead, tourists will not want to visit anymore. Thailand generates more than 100 billion baht per year from marine tourism, so this would be a huge loss for the economy,” he added.

The environment ministry has announced that all coastal provinces will be provided an annual budget for at least five years, in order to boost enforcement of trash management and improve the dismal status of Thailand as a polluter of the sea.

DMCR Region 6 is currently focusing on two projects. The first is a proactive project to reduce the amount of marine debris by preventing littering, and the second will focus on the collection and proper disposal of marine debris that already exists.

“We will start the project with 45 shops and educate them about substituting plastic and other pollutants with more environmentally friendly, reusable materials,” said Mr Suchat. “The project will start on Wednesday (March 1). We will closely monitor it and follow up two months later to gauge success and reinforce the rules if need be.”

Pru Nai Municipality has issued new laws regarding trash management, with a fine of 1,000-2,000 baht for those who do not comply. A certificate of recognition will be given to those who successfully participate in the project.

After Saturday’s efforts at Laem Sai, the next clean-ups in Phuket, Phang Nga and Ranong are scheduled as follows: