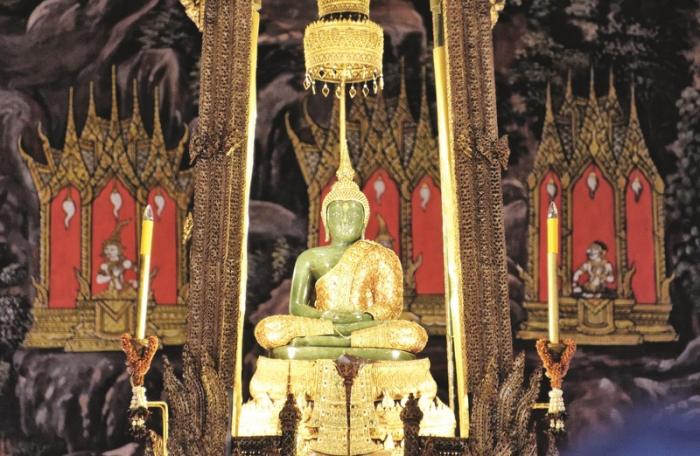 PHUKET: The Emerald Buddha is one of Thailand’s most revered artifacts. Contrary to its name, it is actually carved out of jade. It is a figurine of the seated meditating Buddha. A beautiful and ancient piece of art, it draws tens of thousands of visitors to the Grand Palace and Wat Phra Kaew every year.

No one really knows who carved it or where it originated. Some speculate that it was carved in the north of Thailand, more than five centuries ago. Others believe that the style is more closely related to Sri Lanka.

An interesting legend takes us back to the early 15th century in Chiang Rai. Amid a violent storm, an old chedi was struck by lightning and ripped open. After the storm passed, the abbot of the temple walked up to the chedi and noticed an old Buddha statue with an emerald green nose.

He took the image out of the chedi, began peeling off the stucco it was covered with, and found a beautiful emerald green Buddha statue.

When news spread of the abbot’s discovery, people flocked to pay their respects. King Sam Fang Kaen of Lanna heard about it and insisted on bringing the Emerald Buddha to Chiang Mai, his capital city.

The King sent his elephant to transport it to Chiang Mai. However his elephant kept going to the city of Lampang instead, which he saw as a sign that the guardian spirits wanted it to stay in Lampang. He ordered a temple to be built where the Emerald Buddha was installed with great veneration.

In 1468, King Tiloka of Lanna brought the statue to Chiang Mai, where it remained for almost a hundred years, until the mid 16th century. At that time, Prince Chetthathirath, Crown Prince of Lan Xang, (modern day Laos), was invited to occupy the throne of Chiang Mai.

In 1779, during the reign of King Taksin, a rebellion was brewing in the Laotian territories, which King Taksin ordered to be stopped. In the war that followed, Vientiane was captured and brought back under Siam’s hegemony. On his way back to Thonburi, Chao Phraya Chakri, leader of the King’s forces, brought the Emerald Buddha with him. King Taksin ordered the statue to be installed in Wat Arun.

When King Taksin was deposed in 1784, Chao Phraya Chakri was crowned King Rama I. One of his first acts as king was to move the capital from Thon Buri, on the western banks of the Chao Phraya River, to the eastern side. There he built a magnificent capital, at the center of which was the Grand Palace, with a temple built to house the Emerald Buddha. This temple became known as ‘Wat Phra Kaew’, or the Temple of the Emerald Buddha.

The statue is a symbol of great veneration among Thais. During the early days when Bangkok was first established as a city, it was often paraded in the streets to ward off evil and mitigate the spread of disease and other calamities.

The attire of the Emerald Buddha, intricately carved out of gold, is changed three times a year, during the start of the hot, rainy and cool seasons. The changing of the attire must be carried out either by the King or the Crown Prince in a solemn ceremony.