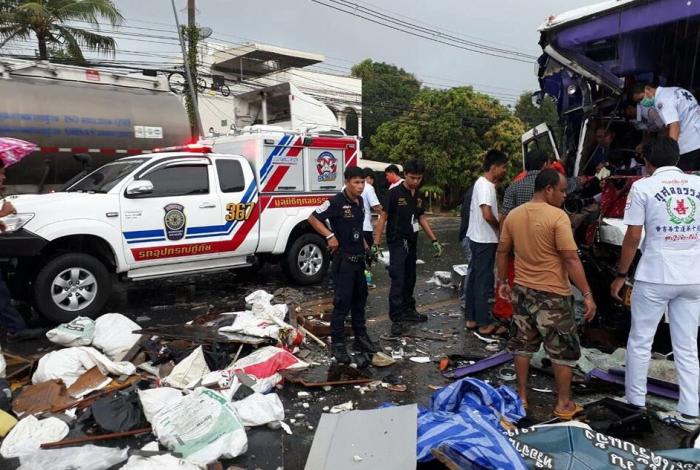 PHUKET: The driver of a tour bus in Phuket was injured after the front of his vehicle was ripped off in a head-on collision with a six-wheeler this afternoon.

Capt Ekkarat Chatpai of Wichit Police received the report at about 2:30pm and arrived at the rain-drenched Muang Thong junction with Kusoldharm Foundation rescue workers.

The bus was being driven by Saman Pansee, 62, from Phuket Town to Ao Makham, while the truck was on its way to Phuket Town.

“Rescue workers used Jaws-of-Life to pull Mr Saman out from the wreckage as his legs were stuck under the console inside the bus. He was taken to Vachira Phuket Hospital,” Capt Ekkarat told the Phuket Gazette.

The bus was heavily damaged from the front, while the truck, damaged on its rear end, careened to the side of the road. The truck driver sustained minor injuries.

“Cargo from the truck was spilled all over the road. Fortunately, the bus was not carrying any passengers at the time,” Capt Ekkarat said.

“Witnesses told us that heavy rain had made the road slippery and that they saw the truck crossing the lane into oncoming traffic and slamming into the bus,” he added.

No charges have been filed yet, but further investigations are underway.

Phuket rains, rather than drivers, have been blamed for many fatal collisions this past monsoon season (stories here, here and here), with today’s unexpected downpour reportedly ‘causing’ this one as well.