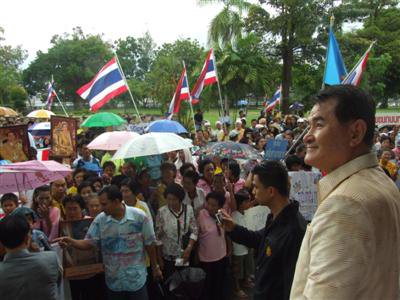 PHUKET CITY: Phuket is ready to host the postponed Asean +3 and +6 conferences, following the abrupt cancellation of the financial summit in Pattaya over the Songkran holiday after anti-government protesters stormed the venue where it was being held.

Phuket Governor Wichai Phraisa-ngop said that the government originally planned for Phuket to host the summit, but moved the high-profile event to Pattaya due to a shortage of rooms in Phuket over the Songkran holiday.

The summit has now been postponed and a new date has not yet been announced by the government, he said.

Gov Wichai has already discussed the issue with tourism industry leaders and there is broad agreement that Phuket could successfully host the summit. The best time would be in July, when hotel occupancy rates are typically at or near their lowest.

A reliable source at the provincial office told the Gazette that the government is now considering both Phuket and Chiang Mai as locations to host the proceedings, which are considered key to finalizing a coordinated regional approach to the global economic problem.

Phuket is a bastion of the yellow-shirted People’s Alliance for Democracy, while Chiang Mai is the birthplace of deposed former Prime Minister Thaksin Shinawatra and a support base for his red-shirted supporters in the United Front for Democracy against Dictatorship (UDD).

The conventional wisdom is that neither side would risk an incursion into enemy turf to disrupt the event if it were held in either city.

The government will likely be watching with interest the PAD fundraising concert and rally at Saphan Hin tomorrow to gauge whether security on the island is sufficient to host the Asean meeting.

If Phuket is granted the conference and hosts it successfully, it could go a long way in repairing Thailand’s image among foreign tourists following the debacle in Pattaya, which saw foreign ministers airlifted to safety by helicopter from the roof of the Royal Cliff Resort after it was overtaken by the UDD protesters.

Phuket is already making preparations to set aside at least 1,600 hotel rooms that will be needed for conference participants, their delegations and international media expected to fly in to cover the event, the Governor said.

Phuket has more than 38,500 rooms in accommodation establishments across the island and average occupancy is expected to be well below 50% for much of the remainder of the low season.

It is thought that if the rescheduled event is held during the low season in Phuket, it will be easier to maintain tight security measures, such as by keeping delegates apart from tourists and screening potential troublemakers.

PAD concert to go on despite Sondhi shooting