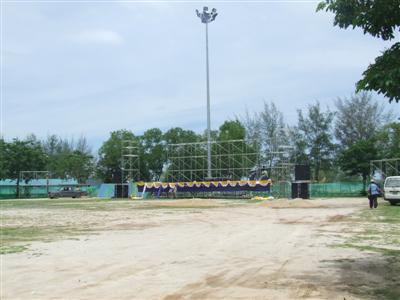 SAPHAN HIN, PHUKET: The People’s Alliance for Democracy (PAD) benefit concert will go on as scheduled tomorrow night, despite the shooting of PAD leader Sondhi Limthongkul early this morning.

Phuket PAD coordinator Aparat Chartchutikumjorn told the Gazette today that Mr Sondhi is now in a stable condition and able to speak after surgeons at Vajira Hospital in Bangkok successfully removed a bullet that was lodged in his skull following the attack.

For the previous report of the assassination attempt, click here.

Mr Sondhi’s condition will require a period of convalescence and he will not be able to attend the Phuket benefit concert, dubbed the ‘6th Political Concert’ by the PAD, Ms Aparat said.

All four other core PAD leaders are scheduled to attend the concert, which will be headlined by a number of well-known acts, including bands Hammers and Zoo Zoo, actor Saranyu “Tua” Wongkrajarng, and other celebrities.

Rooms in four Phuket City hotels have already been reserved for performers, concert organizers and others traveling to Phuket for the event.

In response to the latest escalation of violence, the PAD has increased its number of “security guards” from 200 to 500 for the event.

Phuket City Traffic Police and volunteers working for the Phuket office of the Department of Disaster Prevention and Mitigation (DDPM-Phuket) will be responsible for traffic control.

Some 90% of the 10,000 tickets have already been sold at 200 baht each, but organizers expect as many as 20,000 PAD supporters from across the region to make their way to Phuket for the event, mostly from nearby provinces.

Those unable to buy tickets will be able to gain entry by making a donation at the gate, Ms Aparat said.

Approximately 300,000 baht has been spent to prepare for the event, including erection of a large stage and sound system as well as 17 tents where food will be available free of charge.

The event, scheduled to run from 5pm to midnight, will be completely alcohol-free, and it will be telecast nationwide on Mr Sondhi’s ASTV network.

The Phuket concert will be followed by a similar rally in Rayon in Rayong province on April 25.