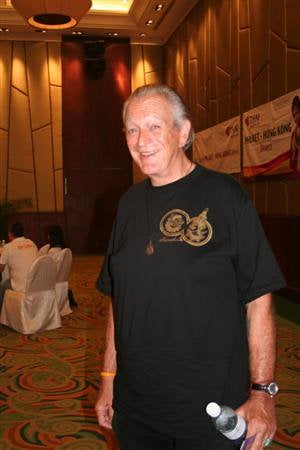 Festival Director Andy Andersen started by thanking new sponsor Thai Airways, then welcomed the artists and told the media about some exciting new developments for this year’s event.

“This will be the best festival to date, not just in terms of premium artists, but also the new layout. We have moved the stage inside the marquee. In the past it was set back about 30ft, so the new stage position will make it a more intimate concert.”

To warm up early-bird arrivals, the Malaysian band AkashA begins playing at 3pm in the Hilton Arcadia lobby until the main gate opens at 5pm.

He will be playing with the Thai based Rockin Angels in their Blues Festival debut.

On Saturday, February 27, the music and fun continue, starting at 5pm with The Prodigal Sons from Norway, George Cordeiro and The Fai Jang Blues Gang, The Groove Doctors, KNiKi, culminating with a performance by blues legend Charlie Musselwhite.

The Tennessee-born blues man, a recent inductee to the 2010 Blues Hall of Fame, was thrilled to be in Phuket for the first time.

After traveling in Thailand for the last three weeks, he said,”I’m looking forward to performing. I love the Thai people, their food and temples….”