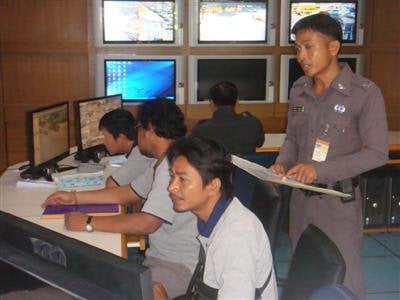 Following a week of training on how to operate the cameras, the four new employees started work on February 11.

They are spending eight hours a day watching live footage of Phuket’s roads, alerting police to accidents and crime.

Originally conceived as a way to provide jobs for people in wheelchairs, the plan hit a snag when it was realized the CCTV control room was on the fourth floor of the police station, which has no elevator.

The four people selected are all disabled, but can still scale the building’s staircase unassisted.

Thaweedetch Yotngam, 33, worked as a cook in a restaurant in Chalong until July 11, 2008, when he was maimed in a car accident.

Mr Thaweedetch spent almost a year in recovery and lost the use of his right hand.

His injury prevented him from returning to the kitchen.

“It was very difficult for me to find a job. Nobody would take me on. It was a really tough time for my family,” he said.

Mr Thaweedetch said he was very happy now. “I have been unemployed for many years, but now I can get paid.”

Sujin Sitthidetch, 34, worked as a gas delivery man until 10 years ago when he crashed into a truck on his motorcycle.

His hip was broken and his right leg was twisted. Unable to carry loads, he had to give up his job and worked for a low wage as a clerk at the gas company.

Mr Sujin is happier to be working at the CCTV center. “This job isn’t so hard, and at least I don’t have to carry heavy things – which I can’t,” he said.

“I’m happy to be earning 9,000 baht a month, which is the same as people with bachelor’s degrees,” he said.

They men are being paid 300 baht per shift. They work from 8:00am until 5:00pm, with a one hour lunch break. At some point in the future, they will begin to alternate shifts and a 3:00pm to midnight shift will be added.

The budget to pay their wages comes from the Phuket Provincial Public Health Office.

The Don’t Drive Drunk Foundation’s Victim Network in Phuket supported the scheme, helping to find suitable candidates able to climb stairs and with with some computer skills.

The President of the network, Nalinee Bunthawadchai, said the network had been running for four years.

“In that time we’ve never seen a company or any other organization open a position for one of our disabled members. It’s nice to help these people get back into society, earning some money to help themselves and their families,” she said.

Phuket City Police Crime Control and Suppression Division head Choengtiphat Dachknettanon said he hoped more people could be recruited for the project so the cameras could be monitored 24 hours a day.