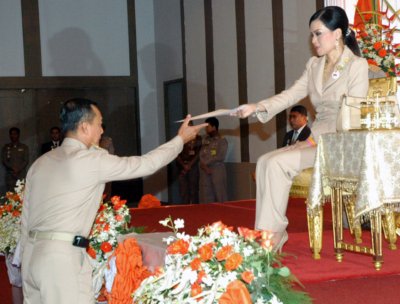 PHUKET CITY: Phuket is one of two provinces in the South to compete in the To Be Number One Province finals, to be held on June 22 at the IMPACT Arena in Muang Thong Thani, in suburban Bangkok.

The southern region To Be Number One awards ceremony was chaired by HRH Princess Ubol Ratana Rajakanya on April 12 at the Royal Phuket City Hotel.

The To Be Number One project is a royal patronage project of Princess Ubon Ratana, who wants to encourage Thai youths to join positive activities in order to prevent them from turning to drugs and other vices.

Other representatives from the South include: Yan Ta Khao Rathachanoopatham School from Trang and Lansakaprachasan School from Nakhon Sri Thammarat, in the school competition; Baan Khok Mamuang from Narathiwat, in the community competition; and PJ 37 Parawood Co Ltd from Yala and Supara Co Ltd from Phang Nga, which both made it into the finals in the To Be Number One Organization competition.

Teenager comatose after being shot in the head