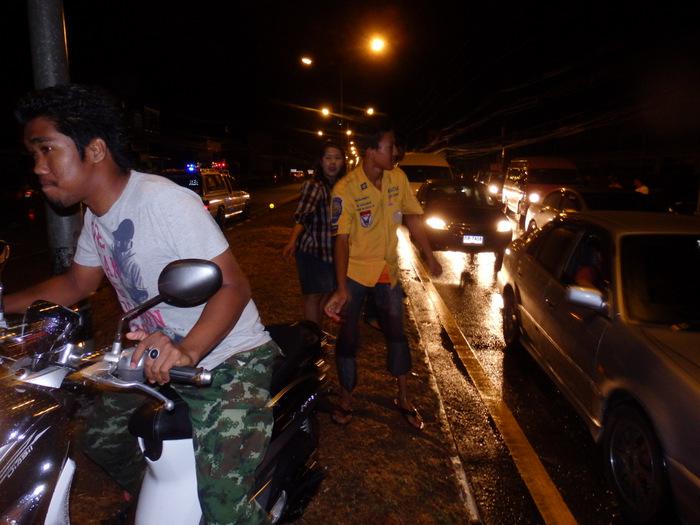 PHUKET: Heavy rain across Phuket last night brought on minor flash flooding in several parts of the the island.

On Thepkrasattri Road in Srisoonthorn, north of Phuket Town, cars and motorbikes stalled as motorists attempted to plow through water that had flooded the road.

“More than 10 people from Srisoonthorn Municipality were called in to help motorists as the flood water brought traffic to a standstill,” said local village chief Chalermpol Kerdsab.

“A few cars and motorcycles stalled because water splashed onto the engines,” said one rescue worker.

“We helped move them to a dry place, mostly onto the median, where after a while they could be restarted. Only one car could not make it and had to be towed away.”

Village chief Chalermpol blamed rapid development in the area for the floods.

“People have raised the level of their land to prevent their houses from flooding and in doing so some of them have blocked waterways,” he said

“It is beyond my authority to do anything about this because issuing building permits is up to Srisoonthorn Municipality officers.”

Regardless, Mr Chalermpol said he was thankful there were no accidents at the scene last night.

“Flashing lights were set on the road to warn motorists and at around midnight a firetruck from Srisoonthorn Municipality was called to drain the flood water because it would not run off by itself,” he said.