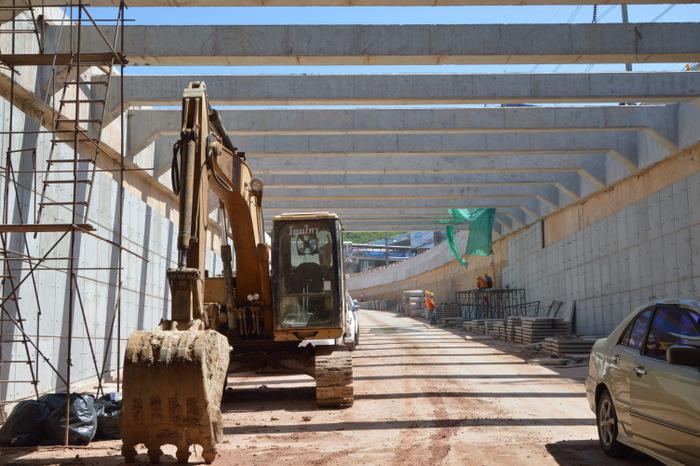 PHUKET: Phuket Highways Office Director Samak Luedwonghad has called for confidence in the construction of the island’s first underpass in the wake of a fatal building collapse which killed 10 people in Samut Prakarn last month.

The Phuket underpass, on the bypass road near the Central Festival Phuket shopping mall, is under construction by the same developer involved in the fatal building collapse: Italian-Thai Development Co Ltd (Ital-Thai).

Following an investigation into the collapse of the medical institute building on the outskirts of Bangkok (story here), the Department of Labour Protection and Welfare (DLPW) is considering filing a complaint against Ital-Thai for failing to submit a construction site safety plan (story here).

“Before starting construction, Ital-Thai filed a full safety report to the Highways Department and a full worker safety plan to the Department of Labour Protection and Welfare (DLPW).”

Mr Samak added that Ital-Thai has filed all its required safety reports for the underpass every month since construction began in November 2012.

“They file all of the different types of safety evaluation reports required, including road safety audits and seismic integrity tests,” he explained.

“These safety reports are not secret; we can show the public anytime they want.”

Ital-Thai, Thailand’s largest construction company, has also been commissioned to build Phuket’s second underpass at the Samkong Intersection near the Tesco Lotus shopping center on the bypass road (story here).