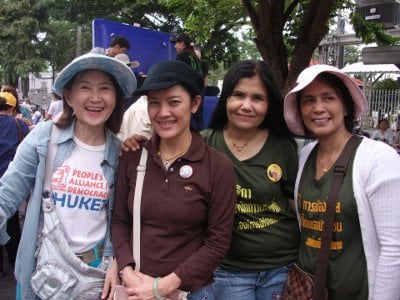 PHUKET: The hundreds of Phuket protesters who joined the Pitak Siam anti-government rally in Bangkok over the weekend have arrived home safe in Phuket.

Concerns were raised on Saturday when police officers with riot shields enforcing a cordon around the protest site at the Royal Plaza started firing tear gas into the crowd and clashes between protesters and police ensued.

However, Apharat Chartchutikumjorn, the Pitak Siam coordinator for Phuket, told the Phuket Gazette on Saturday afternoon that none of the Phuket contingent was injured.

“Some of Phuket supporters suffered eye irritation from the tear gas, but fortunately none of us suffered any serious injuries,” she said.

“Also, none of the Phuket protesters at the rally were detained by police. All the supporters who were detained were released after we agreed to end the rally,” she explained.

Although most of the protesters involved in the scuffles with police suffered little harm, two protesters required hospital treatment.

“Most of the protesters [involved in the clashes] had scratches or bruises from the fighting, but two protesters were seriously injured and were taken to Police General Hospital in Bangkok,” she said.

Ms Apharat said that protest leader General Boonlert Kaewprasit called off the rally because he saw the number of the protesters was gradually decreasing.

“They were being blocked off [from reaching the protest site] by police officers,” said Ms Apharat.

“Gen Boonlert was also worried that the situation might become more violent because he was told by some authorities that if the protesters insisted on staying, the officers would take stronger measures, as well as cut off the electricity and water.

“They were forcing us away,” she said.

Despite the protest not achieving its objective, Ms Apharat was happy to be back in Phuket.

“Although we not were successful with the protest, I am happy that we have arrived home safe,” she said.