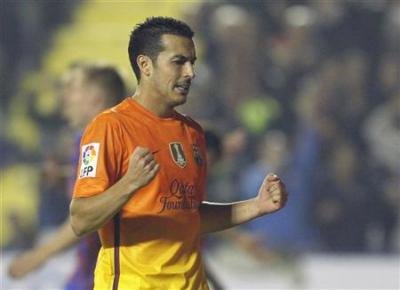 PHUKET: Barcelona maintained their three-point lead in Spain after an inspired Andres Iniesta pulled the strings in a 4-0 win at Levante and Manchester United reclaimed top spot in the Premier League after a 3-1 victory over Queens Park Rangers.

Bayern Munich went nine points clear in the Bundesliga while Serie A table-toppers Juventus slipped up with a 1-0 defeat at AC Milan and Paris St Germain went top of Ligue 1 following a shining performance by Zlatan Ibrahimovic.

Spain
Champions Real Madrid slipped further off the pace when they were upset 1-0 at Real Betis on Saturday, a third defeat of the campaign for Jose Mourinho’s stuttering side.

Andres Iniesta was the star of unbeaten Barca’s victory in Valencia after the Spain playmaker created two goals for Lionel Messi and one for Cesc Fabregas and netted a brilliant effort of his own in a sparkling performance.

With 13 matches played, Barca have 37 points, Atletico 34 and Real 26. Malaga are fourth on 22 after they thrashed Valencia 4-0 on Saturday, level with fifth-placed Betis and two ahead of Levante in sixth.

England
Manchester United returned to the top of the Premier League standings with a 3-1 home win over Queens Park Rangers as champions Manchester City were held to a 0-0 draw at Chelsea in Rafa Benitez’s first game in charge of the London club.

Spaniard Benitez received a hostile reception from the Chelsea fans after replacing Roberto Di Matteo as manager and his players struggled for inspiration at a rainy Stamford Bridge against well-organised City.

United top the table with 30 points from 13 games, one ahead of City, four clear of third-placed West Bromwich Albion, who continued their fine start with a 4-2 win at Sunderland, and five above Chelsea.

Italy
Leaders Juventus suffered a second defeat in quick succession when they were beaten 1-0 by AC Milan after a controversial Robinho penalty.

Juve lead with 32 points from 14 matches with Inter Milan four points behind in second before their trip to Parma on Monday.

Third-placed Fiorentina left it late to grab a point in a 2-2 draw at Torino as Mounir El Hamdaoui came off the bench to score an equaliser six minutes from time.

Germany
Bayern Munich opened up a nine-point lead with a 5-0 demolition of Hanover 96 with forward Mario Gomez on target in his first league match this season.

Gomez, who underwent ankle surgery in August, netted 26 seconds after coming on as Bayern made it 11 wins from 13 games.

Champions Borussia Dortmund made it three wins in a row with a 2-1 victory at Mainz 05 to leapfrog into second place on 25 with Schalke 04 dropping to third after a 1-1 draw with Eintracht Frankfurt.

France
Zlatan Ibrahimovic returned from a two-game suspension with a bang as he scored two and set up as many to send Paris St Germain top of the Ligue 1 table with a 4-0 demolition of Troyes on Saturday.

Ibrahimovic has now scored 12 goals from 11 Ligue 1 appearances for PSG, who lead second-placed Olympique Marseille on goal difference after the Provence side beat 10-man Lille 1-0 yesterday.

Marseille will play a game in hand on Wednesday at fourth-placed Olympique Lyon, who missed out on top spot when they were humbled 3-0 at Toulouse.

Girondins Bordeaux also missed out on the chance to go top as they lost 1-0 at champions Montpellier. St Etienne are third after they beat Valenciennes 1-0 on Friday.

Holland
Vitesse Arnhem came from behind to beat leaders PSV Eindhoven 2-1 with top scorer Wilfried Bony scoring his 15th goal of the season.

Third-placed Vitesse closed to within two points of PSV who have 33 points after 14 matches.

Luc Castaignos’ stoppage-time header salvaged a 2-2 draw for second-placed Twente against PEC Zwolle. Steve McClaren’s side are level on points with Vitesse.

Ajax Amsterdam and Feyenoord registered wins at Roda JC Kerkrade and AZ Alkmaar respectively to stay in touch with the top on 27 points.

Portugal
Champions Porto fought out a 2-0 win at third-placed Braga with late goals from Colombian duo James Rodriguez and Jackson Martinez to stay top of the Portuguese Premier League, level on 26 points with Benfica.

The Lisbon club eased past Olhanense 2-0 at home thanks to a first-half penalty from Paraguay striker Oscar Cardozo and a textbook header from captain Luisao in the second half.

Phuket protesters back home after rally in Bangkok