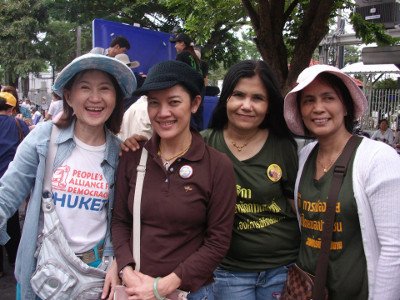 PHUKET: The hundreds of Phuket protesters who joined the Pitak Siam anti-government rally in Bangkok over the weekend have arrived home safe in Phuket.

Concerns were raised on Saturday when police officers with riot shields enforcing a cordon around the protest site at the Royal Plaza started firing tear gas into the crowd and clashes between the protesters and police ensued.

Some protesters had cut barbed wire with cutters, while others tried to remove concrete blocks with a six-wheeled truck, Gen Piya said.

An eye-witness account published by the Gazette partner publication The Nation reported that demonstrators were told to confront police by unknown members of the crowd with a loudhailer.

Saturday afternoon, Apharat Chartchutikumjorn, the Pitak Siam coordinator for Phuket, confirmed to the Phuket Gazette that none of the Phuket contingent was injured in the scuffles.

“Some Phuket supporters suffered eye irritation from the tear gas, but fortunately none of us suffered any serious injuries,” she said.

“Also, none of the Phuket protesters at the rally were detained by police. And all the supporters who were detained were released after we agreed to end the rally,” she explained.

Although most of the protesters involved in the ‘push and shove’ with police suffered little harm, two protesters required hospital treatment.

Ms Apharat said that protest leader General Boonlert Kaewprasit called off the rally because he saw the number of the protesters was gradually decreasing.

“They were being blocked off [from reaching the protest site] by police officers,” said Ms Apharat.

“Gen Boonlert was also worried that the situation might become more violent because he was told by some authorities that if the protesters insisted on staying, the officers would take stronger measures as well as cut off the electricity and water.

“They were forcing us away,” she said.

Since Saturday, normalcy has returned to the capital and police are expected to ask Prime Minister Yingluck Shinawatra today to lift the Internal Security Act restrictions imposed on the three areas in Bangkok.

Police Commissioner-General Adul Saengsingkaew has announced that police have lifted barriers on the nine roads where public access had been restricted.

Despite the protest not achieving its objective, Ms Apharat was happy to be back in Phuket.

“Although we were not successful with the protest, I am happy that we have arrived home safe,” she said.

Some analysts have already gone on record as saying that the handling of protest by government forces is likely to have made PM Yingluck’s administration stronger and boosted confidence in her leadership.