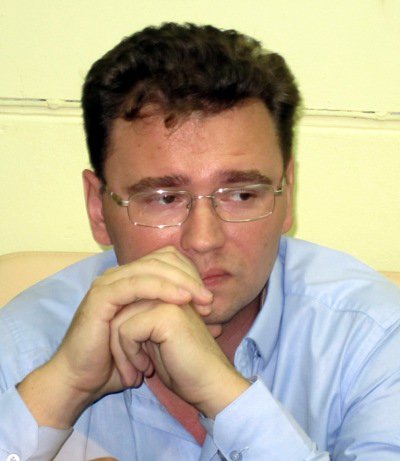 The two met at Thung Thong Police Station today to assert their claims over the startup company that also sells Phuket property to Russians.

Mr Boonprasert told the Phuket Gazette, “Four years ago Nikita Derkarch used to work with us as a manager up until the beginning of 2010. He said he would open a new company and we let him take the company documents and our client database.

“We had an agreement that we would set up a new company for a year, and split it 50:50. Under the agreement, Mr Nikita must report to us the company’s progress every month and then after one year we would discuss again whether or not we would continue with the new company,” he said.

“He opened ThaiRus Property Co Ltd. It is still running. The one-year deal ended in April. He never showed up. I finally saw him today,” Mr Boonprasert added.

Sorasak Soijampa, Mr Derkarch’s lawyer, explained to the police, “ThaiRus and Mr Nikita had a disagreement over commissions. The two parties could not settle it, so they made an agreement that Mr Nikita, who was taking care of real estate, would open a new company and the profits would be shared 50:50 with ThaiRus Development.

“Mr Nikita opened a new company, but the company wasn’t making any profit. There were debts and Mr Nikita informed Mr Boonprasert to take responsibility for his part of the debts and for his role in the day-to-day operations of the new company.”

To this Mr Boonprasert retorted, “First of all, I have never been informed about any of the new company’s operations. We had an agreement to work on it for only one year. Moreover, ThaiRus Development cannot contact any customers because Mr Nikita has taken all of our customers’ details and the company website.

“All contacts in the website go directly to Mr Nikita. We cannot do anything in the company as Mr Nikita is the one who takes care of the website.

“When he said he would open a new company I thought there would not be any problems because I thought it would be supporting us, the head office. In the end, it turned out that we have been locked out from our own website,” he alleged.

Mr Sorasak offered to settle, right then and there.

“If you prefer Mr Nikita not to be involved in the website, to which he thought he had all rights to, he would be okay. Is it okay for you?” he asked.

Mr Boonprasert declined to accept the offer – for now.

“I cannot decide this all by myself because I have other shareholders. I have to discuss this with them,” he said.

“I invested up to 20 million baht in this company. I spent a lot of money on compiling our customers’ details into our directory. This is not only about the website, it is all about customers,” he said.

Mr Sorasak later told the Gazette, “Mr Boonprasert owed Mr Nikita 700,000 baht in commissions. They then made an agreement that Mr Nikita would open a new company and they would share the gains 50:50. That means profits and debts.

“The new company was not making any profit, so Mr Nikita sent MrBoonprasert a written notice to be responsible for his part of the debt, but he never replied.

“We have all the proof that Mr Nikita made the entire website by himself and all the customers he has are those he has been contacting. We will sue them if they do not stop this,” he warned.

Happily out of the fray, Duty Officer Capt Sakchai Chuntong told the Gazette, “It seemed they nearly reached an agreement today, but if the problem cannot be resolved and they prefer this matter goes to court, I will have the complainant [Mr Boonprasert] to come to answer further questions on Friday.”