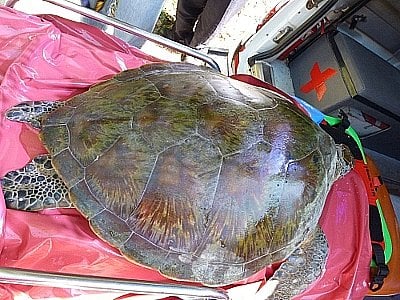 PHUKET: An observant tourist yesterday spotted a young green sea turtle floating in the water off the Yacht Haven Marina in Mai Khao, in the north of Phuket, and by doing so may have saved its life.

The Phuket Marine Biological Center (PMBC) was immediately contacted, who in turn asked the Phuket Kusoldharm Rescue Foundation for assistance in recovering the turtle.

With the rescue operation a success, the turtle was quickly transferred to the care of Dr Patcharaporn Gaewmong, veterinarian for the PMBC’s Endangered Marine Species Unit.

Dr Patcharaporn and her team examined their patient, finding it weak and in need of treatment.

“We examined the turtle and identified it as a green sea turtle about 10 to 15 years old, weighing about 15kg. We have yet to determine its gender,” Dr Patcharaporn said.

“The turtle has no wounds. However, its skin is scratched and macerated [chronically wet and soggy]. Also, the eyes are hollowed, which may be caused by dehydration,” she said.

Dr Patcharaporn explained that treatment will begin with energy replacement fluids, as the turtle is very weak.

“We will also administer antibiotic and anti-inflammatory medications,” she said.

“After that, we will test a blood sample and perform an ultrasound examination on its internal organs in order to ascertain the cause of illness. Once we find out what’s wrong we can then start treatment,” Dr Patcharaporn said.

The PMBC veterinarians are accustomed to rescued turtles being brought to the center. They have successfully treated and released back into the sea about 80 per cent of the turtles brought to them, said Dr Patcharaporn.

Another 10 percent, whilst surviving, were too badly injured to be released, she added.

The turtle discovered yesterday is the third to be rescued off Phuket since October 1, the other two being an Olive Ridley and a Hawksbill.