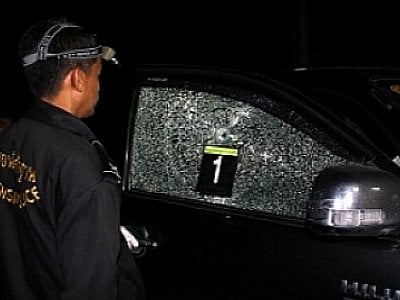 PHUKET: A Phuket prison officer was shot and robbed of 3 million baht in cash near Wat Chalong last night, in what police believe was a sweet business deal gone sour.

At about 8:30pm, Chalong Police received a report about the shooting on Luangpor Chaem Road from a concerned local resident, who explained that despite injuries sustained the victim had driven his vehicle to a relative’s house a short distance away.

Mr Darunun was not at the house when police arrived, as the same resident who reported the incident had taken him to Phuket International Hospital for treatment to his neck and shoulder.

“Having spoken to Mr Darunun, I’m under the impression that the cause of this incident was a business conflict. Both men invested in the same construction project, but unfortunately couldn’t agree on how to divide the profits. So, his partner decided to shoot him and take all the money,” explained Col Sirisak.

“We already know who the suspect is and where he lives. We’ll arrest him as soon as possible,” he added.

Mr Darunun was last reported to be in stable condition.