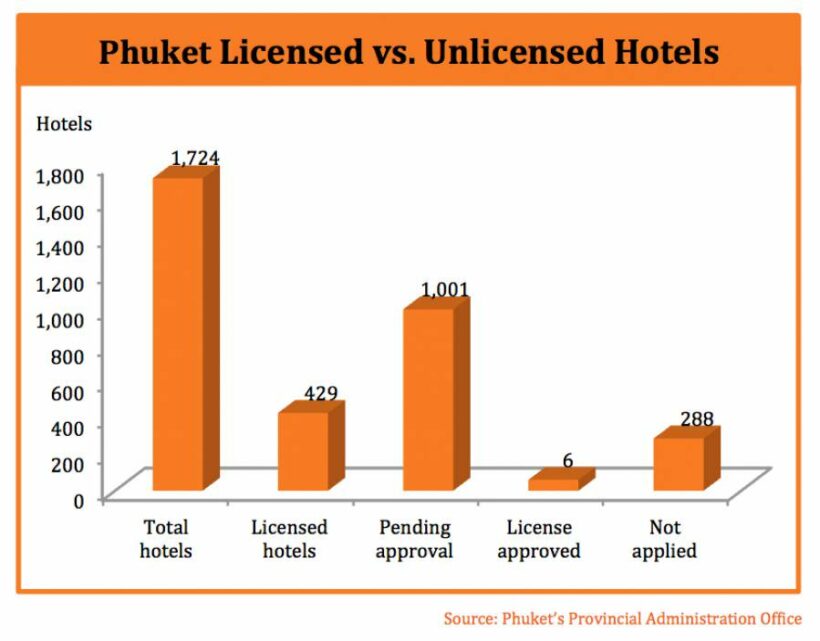 PHUKET: According to a new report released today by hospitality consulting group C9 Hotelworks, millions of travellers who visit Phuket each year could be staying in unlicensed – and effectively illegal – hotels. The report also states that less than a quarter of the hotels in Phuket (429 out of 1,724) are currently licensed.

This issue was brought into sharp focus late last year when former Phuket Governor Chokchai Dejamornthan announced plans for a crackdown on unlicensed hotels on the island (story here).

At the time, Governor Chokchai urged the travelling public not to stay in unregistered hotels. But despite a deadline of January 31, 2017 for offending hotels to become legally registered, C9 Hotelworks underscores that now, six months later, the situation remains challenged.

Data from Phuket’s Provincial Administration Office shows that of the 1,295 unlicensed hotels identified in Phuket, only six have had their licenses approved. A further 1,001 are pending approval, while 288 have not yet applied.

C9 Hotelworks’ Managing Director Bill Barnett says that a disconnect in regulation could be hindering the licensing process.

“Currently the main challenges for the process are the strict regulations associated with the Thailand-wide ‘Building Control and Hotel Act’. As a result of these mandates, the province is considering reviewing the requirements to support the conversion process.”

Local authorities are under pressure to tackle this issue, as strong demand from emerging economies continues to drive a sharp increase in tourism arrivals to Phuket. For example, Russian passenger traffic at Phuket International Airport jumped 17 per cent in the first five months of 2017, while arrivals from Mainland China rose 8 per cent. With 17 Chinese airlines now flying into Phuket, Mainland China accounts for two-thirds of Asian traffic at the island’s airport.

Hotel development in Phuket also continues to gather pace; according to C9 Hotelworks’ pipeline analysis, there are now 33 hotels being developed across the island, which will add 5,738 more rooms to Phuket’s inventory. These include major global brands such as Sheraton, JW Marriott, Best Western, InterContinental, Park Hyatt, Kempinski, Ramada and Rosewood.

With so many new hotels due to enter the market in the coming months and years, Phuket’s authorities are mandated to ensure regulatory processes that are stringent and effective, while the reality is not being overly complex or bureaucratic. At the same time private sector investment into the hotel industry is racing ahead of the public sector.

Without the ability to apply hotel tax to unlicensed properties, the island is being denied much needed revenue that could be reinvested into infrastructure. There remains an imperative to ensure that the 1,295 unlicensed hotels currently operating in Phuket are dealt with swiftly and effectively, to ensure the issue does not do damage to the island’s international reputation.

Mr Barnett is quick to point out that many of Southeast Asia’s surging mass tourism resort markets face a similar issue to Phuket. One case in point is Bali where the official registered number of hotels stands at 317, with 33,599 rooms according to the Indonesian government’s Badan Pusat Statistik.

In reality, inventory stands well above that of Phuket. Government regulating bodies have to understand the close relationship between hotel licensing and tax issues in order to not be left out in the cold.

Phuket Lobster Festival to be held next month