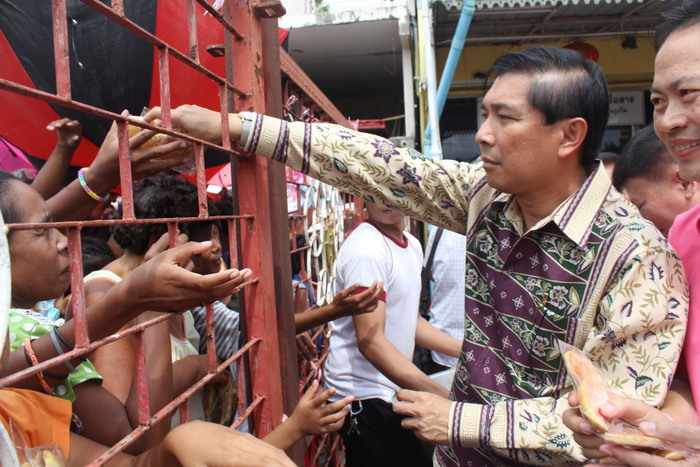 PHUKET: More than 1,500 of Phuket’s poorest showed up at the Kusoldharm Foundation’s headquarters yesterday to receive food and clothing donations as part of the annual Te Krajard merit-making ceremony.

“This year, we handed out scholarships to needy students from local schools and 2,600 five-kilogram bags of rice. We also distributed clothes and packages of dry foodstuff to about 1,500 people,” said Kusoldharm Foundation President Benjawan Tamphanuwat.

“The Por Tor Festival begins on the first day of the waxing moon in the seventh month of the Chinese calendar. It is a time when adherents pray for the souls of their ancestors and make food offerings to appease ‘hungry ghosts’ that might otherwise wreak havoc on the living,” she explained.

Shrines throughout the island will hold special events during the Por Tor Festival. A variety of shops will be set up and festive foods, such as the red, turtle-shaped Chinese sweet called Tau-Ku and decoratively carved fruits, will be on display.

A list of locations where Phuket residents and visitors can take part in the festivities is as follows:

August 12-13: The highlight of the festival, held by Phuket City Municipality, will take place at the municipal
market on Ranong Road starting at 2:30pm