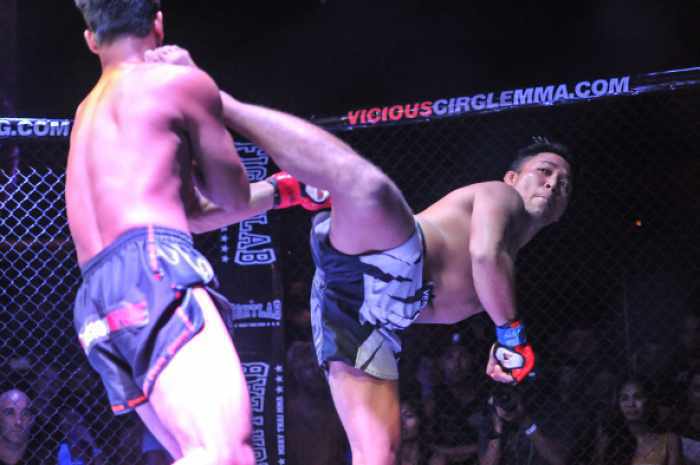 PHUKET: It was on June 7 at Patong’s Seduction Nightclub that MMA entered Phuket for the first time (story here). The Full Metal Dojo MMA event featured a litany of warriors from around the globe. The event saw fighters from Thailand, Cambodia, Finland, the United States, France, and other countries enter the caged-dojo for the first time in Phuket. And it’s happening again.

Full Metal Dojo 2: Protect Your Neck brings a double-dose of MMA action back to the island. With an array of entertainment that surrounds the fights card, a unique women’s bout and fighters from all over entering the cage, it promises to take the sport of MMA to a new level in Phuket.

Headlining the event will be a catchweight bout between Afghanistan’s Baz Mohammad Mubariz (3-2) and Sweden’s “Creepy” Kristoffer Persson (2-3). Both fighters regularly train in Thailand with Baz sharpening his skills at Phuket Top Team (by way of Afghanistan’s Team Diesel Diva) and “Creepy” Kris hailing from Legacy Gym in Ubon Ratchathani and Boracay, in the Philippines.

The rest of the fight card will feature warriors that are based across Asia as well as some returning heroes. In the inaugural Full Metal Dojo show, Chatmongkhon “Noom” Simma (of Legacy Gym in Ubon Ratchathani) put away his fellow Bangkok-native, Sarawut “The Monkey” Petsing, in the first round via TKO. Noom will look to continue his winning streak when he takes on Tanabadee “Ninjaman” Supparukephusakun in an intriguing bantamweight (145lbs/66kg) bout.

The fan-favorite Muay Chaiya specialist Detchadin “Phetsingkorn” Sornsirisuphathin also returns to continue his run in the Dojo, this time against Cambodia’s Chan Heng (AFighter Gym) – a fighter looking to redeem his loss in the Dojo against Alex Schild. In their previous bouts Phetsingkorn defeated Manaschai “Lee.O” Promsawad by kicks to the head, while Chang Heng was forced to tap to a rear naked choke.

Full Metal Dojo 2: Protect Your Neck will take place on August 23 at the Seduction Nightclub in Patong. For more information go to facebook.com/fullmetaldojo.