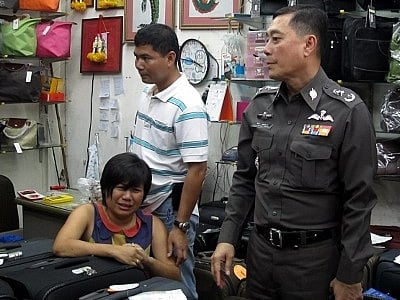 PHUKET: Two high-profile raids in Phuket yesterday, in the prime tourist areas of Kata and Patong, landed goods valued at more than a million baht.

The first raid was on a shop near Dino Park in Kata, at about 3pm.

There, officers seized a haul of hundreds of imitation brand-name shorts and wallets, and more than 400 pirate wristwatches.

Officers have yet to determine the value of the goods seized.

No arrests were made however, as the shop attendant fled the scene when the officers arrived.

Leading the raid was Phuket Provincial Police Commander Pekad Tantipong, accompanied by Department of Intellectual Property Director-General Pajchima Thanasanti and officers from the Legal Execution Department of the Ministry of Justice.

Next to be raided was a shop on the beach road in Patong, where officers arrested 41-year-old Sanom Saiyood and seized more than 900 items.

After scouring the main shop area, officers demanded Ms Sanom open a door at the back that they said they knew led upstairs to a storeroom for more pirated goods.

The tearful manager refused, and asked the officers to produce a search warrant.

Maj Gen Pekad made a phone call and two hours later presented her with the required warrant.

However, Ms Sanom told police she did not have the key to open the door, so officers forced their way in.

On the three floors above, officers found a treasure trove of fake goods, many of them bags bearing Louis Vuitton and Gucci labels.

Officers also arrested a Burmese man found hiding in the building next door.

“The shop manager refused to let us in and said she couldn’t unlock the door to the warehouse [upstairs]. This gave them time to move some of the fake watches,” Maj Gen Pekad said.

The watch display cases in the main shop downstairs were empty when police arrived.

The Burmese man, not named by police, was charged for not having a passport.

“We would like to thank Commander Pekad and the team for their cooperation. Phuket is a ‘red area’ for pirate goods and this shop is the biggest store and warehouse [that we have discovered] in Patong,” said Mrs Pajchima.

“Please understand that we do not intend to cause vendors any harm, but this is illegal,” she added.

Mrs Pajchima explained to the media that the pirated goods business was still a lucrative one.

“Last year we seized pirated goods with a total value of about a billion baht,” she said.

“Not only were clothes and leather goods seized, but also grocery products such as fish sauce and soy sauce, which is very dangerous,” Mrs Pajchima said.

“On Monday, we will destroy these pirated goods seized today and a further 140,000 other items,” she added.

Police have yet to determine the total value of the goods seized in yesterday’s raids.

Iceland volcano eruption has no effect on Phuket flights