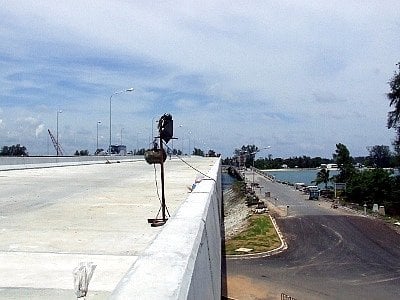 PHUKET: The new bridge connecting Phuket with Phang Nga will be open to traffic next week as planned, the Phuket Provincial Highways Office (PPHO) announced.

Known as the “Sarasin Bridge 2” throughout the construction phase, the new roadway will be known officially as the Srisoonthorn Bridge.

“The new bridge is about 94 per cent complete and the construction contract ends on June 20,” Arun Sanae, director of the PPHO said.

“After that, Italian-Thai Development construction company will transfer the bridge to us,” he said.

In the meantime, the contractors will continue to complete small details such as the marking of lanes, he added.

Temporary signs notifying drivers of the coming change will be erected near the bridges soon.

“The official opening will occur toward the end of the year. After the ceremony, the bridge will be known as Srisoonthorn Bridge, a name provided to us by the Royal Family at our request,” Mr Arun said.