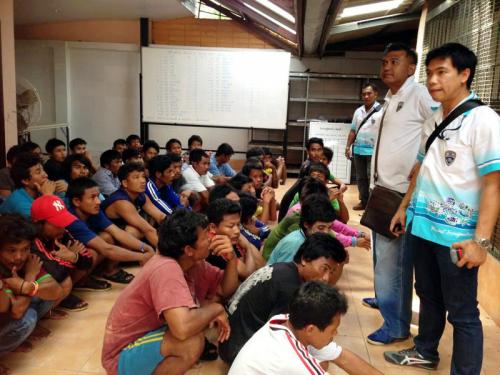 PHUKET: Police rounded up 84 suspected illegal fishermen from across the island yesterday through raids on the Phuket Fish Marketing Organization, the Patong area and various boats dotted along the Phuket coastline.

On seeing the raiding officers arrive at the Phuket Fish Marketing Organization office, some illegal workers attempted to escape.

“A number of them ran in different directions. Some ran into the forest and others fled to the second floor of the building,” said Col Sanchai.

“The police managed to track some of them down and informed them that they were simply checking for work permits,” Col Sanchai explained.

All 84 suspects were brought to Phuket Immigration to check their documents and immigration status.

One of the business owners whose workers were rounded up was able to show valid work permits for six of the suspects.

“Of the remaining 78 suspects, 73 were charged for working in positions [or places] that differed from those cited in their work permit,” Col Sanchai said.

The other five had entered Thailand illegally.

In total, 69 of those held by Immigration were Burmese, four were Vietnamese, one was Cambodian, two were Indian and two were Pakistani.

The suspects are currently being detained at the Phuket Immigration office, awaiting deportation.