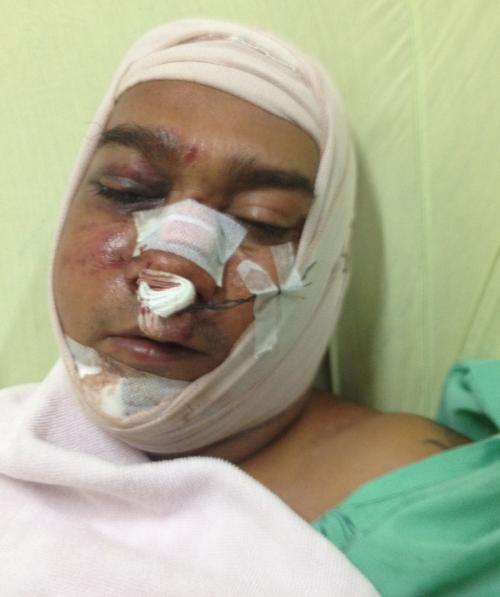 PHUKET: A change of corners in the beating of a Nepalese tailor has revealed that the tailor, Aung Aung Latt, was in fact the one hospitalized after being severely beaten by another tailor who has only been identified as “Rocky”, despite previous reports (see here).

Vachira Phuket Hospital staff were unable to confirm or deny the identity of the hospitalized tailor until today.

“Mr Latt is in our care and still receiving treatment. We have yet to set a date for him to be discharged,” a hospital staffer told the Phuket Gazette.

The Gazette was contacted by a family member of Mr Latt after the incident.

“Rocky and his group attacked Raju [Mr Latt], leaving him bleeding profusely on the street,” the relative said.

The bloody duel between the two tailors started about three months ago over a business conflict derived from competing for customers, explained Mr Latt’s relative.

“Raju was the one who attacked first. He was arrested after attacking Rocky, and they agreed for a compensation payment of 50,000 baht to be made,” the relative said. “I was dealing with the payment for Raju, and remember that I paid 50,000 to Rocky on May 14.”

Mr Latt took a holiday to visit family in Myanmar and did not return to Phuket until about a week ago.

“‘Rocky and his friends came from nowhere and attacked Raju. If Raju’s friends had not helped him, I think he would be dead now,” the relative said.

Thai-Nepal Foundation President Phanuphong Limbuprasertkul confirmed to the Gazette this morning that “Rocky” had been arrested.

“I do no know whether or not he is out on bail. However, this conflict will be taken care of through due process of law,” Mr Phanuphong said.