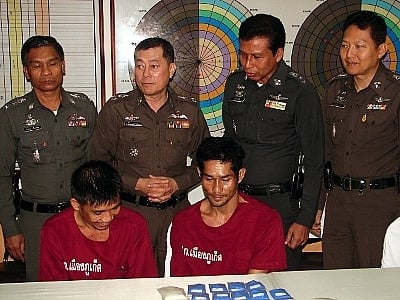 PHUKET: Phuket City Police yesterday arrested a drug mule with 2,000 ya bah (methamphetamine) pills and 197.14 grams of ya ice (crystal meth), with a street value of about 1.1 million baht.

The arrest followed the initial arrest of Jamnong Chumplub, from Nakhon Sri Thammarat, who was found in possession with 10 ya bah pills in an earlier raid.

During questioning, Mr Jamnong told police he “ordered” the drugs through a man he identified only as “Mr Phab”, who is apparently currently imprisoned in Nakhon Sri Thammarat, said police.

Mr Jamnong was waiting for a drug delivery when police arrested him.

Officers arranged for Mr Jamnong to have another shipment delivered to a rendezvous point at Tesco Lotus at noon yesterday.

Police pounced on Aram “Paek” Or-Yam, 48, from Ranong, when he showed up with the drugs.

He now faces charges of possession and intent to sell class 1 drugs.

At the media conference this morning, Mr Aram confessed that he had been hired many times to deliver drugs for Mr Phap.

US dad nabbed in Phuket gets 10 years for passport fraud