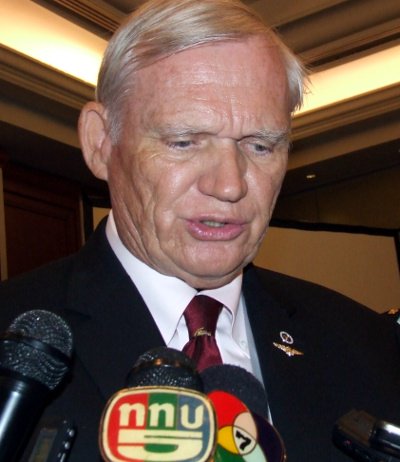 PHUKET: The third and final symposium of major human aid agencies and 16 navies covering half the world drew to a close in Phuket yesterday, with representatives focusing on naval involvement in providing relief to disaster-struck areas, including nuclear meltdowns.

The symposium, titled the third Humanitarian Aid and Disaster Relief (HADR) of the Western Pacific Naval Symposium (WPNS), was held under tight security at the JW Marriott Resort in Mai Khao.

The workshop was themed “Seapower – A Unifying Force for Good”, with the aim of improving participating nations’ understanding of what was required in providing disaster relief and to better coordinate in delivering relief to disaster areas.

Among the focus areas of the discussions was the provision of emergency disaster relief in the Asia-Pacific. Disasters discussed included earthquakes, tsunamis, cyclones, volcano eruptions, flooding, drought, famine, and the newest element – not previously discussed at the forums – was the threat of nuclear meltdown, referring to the recent crisis in Fukushima, Japan.

“We’re now looking at how to better disseminate the information required to alleviate the grave concerns and questions coming up so there is a better understanding of how to deal with those types of disasters,” the WPNS Executive Director for Plans and Policy, Commander William J. Wesley, said.

Naval representatives from 16 (of 22) WPNS nations took part, including the US Pacific Fleet and Pacific Command, four observing countries, at least seven NGOs, ASEAN designates, and other government officials.

The US Navy and Royal Thai Navy co-hosted the event.

Also at the meeting were representatives from the United Nations’ UNHCR, UNICEF and World Health Organization.

The meeting was held among the tight posting of dozens of armed Military Police and came on the week before the reportedly unrelated coincidence of more than 5,000 US Navy servicemen arriving in Phuket for R&R this week.

However, Cdr Wesley clarified, “We didn’t have a force structure here. What we had were representatives of like-minded navies within the WPNS.”

By bringing together WPNS Navies with government and non-government entities, Cdr Wesley explained that such an underlying structure…gives us the ability to work together synergistically…on how to achieve the results of ameliorating human suffering.”

The symposium was the third HADR WPNS workshop held. The first, planned after the 2004 tsunami, was held in Bali in 2007, and the second in Singapore in 2009.

Asked why Phuket was chosen for the third and final workshop, Cdr Wesley replied, “Phuket was chosen by the Royal Thai Navy because of its past experience with the tsunami and because their view was that there are a lot of interests [hoping that] that we [could] achieve some good results.

“They also wanted to make sure that it was held in an area that could be well protected and secure from any type of untoward act,” he added.