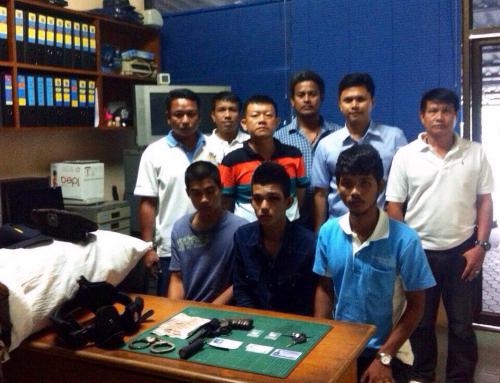 PHUKET: Three privates in the Army were arrested yesterday on charges stemming from the theft of a handgun and other property from the home of a policeman.

The theft that tipped police off to the military men’s activities occurred early on the morning of October 12 at the home of Patong police officer Sgt Rongrot Pecharat.

“Sgt Rongrot reported that a .38 caliber* handgun was stolen from his house, along with an official black police belt, a flashlight, handcuffs and a radio transceiver,” Thung Thong Police Superintendent Thitirat Asakit said.

About two weeks later, on October 27, police learned from an informant that the thief would return to Sgt Rongrot’s house, located in a police housing estate.

“At about 3am on Sunday, we staked out the house,” said Pol Maj Chawapol Sabtisassanakul.

The officers saw a man park his motorbike near the house. When they presented themselves as police, he fled.

“He ran, but we were able to catch him,” said Maj Chawapol.

The officers took the man, Private Narubet Bunyayurn, 22, to his house in Patong. In his bedroom they found a wealth of stolen goods; they also found .48 grams of ya ice (crystal methamphetamine).

In addition to four items stolen from Sgt Rongrot’s house, police discovered four police uniforms and parts of government officers’ uniforms – nine shirts and three pairs of pants – as well as two hats, one for a security guard and one for a municipality officer. They also seized 13,000 baht in cash and a motorbike.

Mr Narubet confessed that he had stolen the items, and said he planned to use them as disguises in future robberies.

“He said that he sold the gun for 13,000 baht to friends who are also in the military,” said Maj Chawapol.

Shortly after the pair were identified, undercover officers spotted them in the parking lot of the Tesco Lotus on the bypass road. Police rushed to apprehend them.

Mr Krittayot and Mr Jeeradet were charged with receiving stolen property, possession of a gun without a permit, and carrying a gun in a public area without permission.

Mr Narubet was also charged with possession of a gun without a permit and carrying a gun in a public area without permission, in addition to theft and possession of a Category 1 Drug.

They were all taken to Thung Thong Police Station to be questioned further, Maj Chawapol said.

*Correction: The original report stated a .38mm handgun was stolen. The error is regretted.