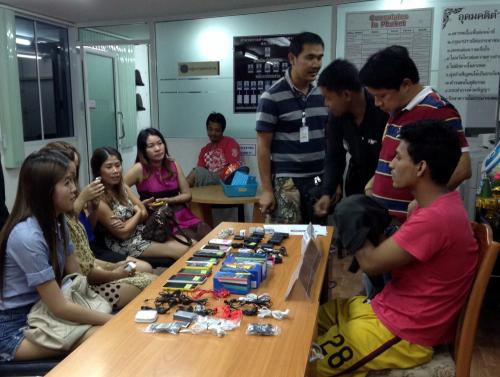 When the movie ended, Mr Kitti went down the escalator and slipped into the mobile phone section one floor below. Because he had worked at the mall before, he knew the patrol times of security guards and was able to avoid detection, Lt Col Jakkrawath said.

Mr Kitti broke into the displays of seven shops and walked out of the area carrying 26 stolen mobile phones.

When the shop owners reported the thefts the next day, police secured CCTV images of the crime taking place, and called in mall security for questioning. Watching the film, security staffers recognized the thief as Mr Kitti, who had until recently worked with them.

“We checked our own records and found that Mr Kitti had been arrested for theft before,” Col Jakkrawath said.

“The head of security at Central gave us his address, and we arrested Mr Kitti at his rented room in Karn Keha public housing estate in Phuket City on October 27,” said Col Jakkrawath.

“Mr Kitti was charged with theft, and he accepted the charge. He said he committed the crime because he needed money,” Col Jakkrawath said.