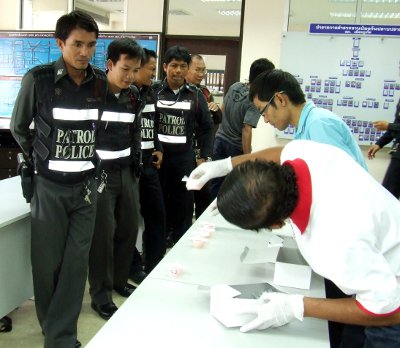 PHUKET: Every police officer in Phuket will undergo mandatory testing for ya bah (methamphetamine) by the end of the month, the provincial police commander announced this morning.

Maj Gen Pekad Tantipong told the Phuket Gazette, “Every police station must urine test every officer under their command by May 1. The order was issued by Provincial Police Region 8 at the end of last month,” he said.

“Any officer testing positive will be severely punished,” said Maj Gen Pekad, adding that even commanding officers will be tested.

“I will receive all of the results and know how many officers in Phuket test positive. However, I have yet to receive any reports of officers testing positive,” he said.

Under the scheme, police will be tested by workers from the Phuket Provincial Health Office using a “Meth Cassette” kit manufactured by the Government Pharmaceutical Organization.

Those whose urine turns purple after being mixed with the reagent will have blood samples taken. These will be sent to a police testing facility in Trang for final confirmation in a procedure that takes about one week.

“We cannot test them all simultaneously as they work different shifts and some need to travel out of the province as part of their duties. For this reason they will be tested in groups,” he said.

As police are sometimes ordered to conduct random drug tests on the general public, it is important that they prove they are not involved with drugs themselves, he said.

“This is the third year Phuket City Police has drug tested its officers. So far none have tested positive,” he said.

Phuket City Police arranged testing of 289 officers over a two-day period: 193 officers yesterday and most of the remainder today.

About 30 officers currently outside the province will be tested later, Lt Col Chaiwat said.

“All Phuket City Police officers, almost 300 people, must undergo drug testing. The results will be submitted to our commander at the beginning of next month,” he added.

There are a total of 1,196 police officers stationed in Phuket.

The detection period for methamphetamine in urine can range from anywhere from one to five days.