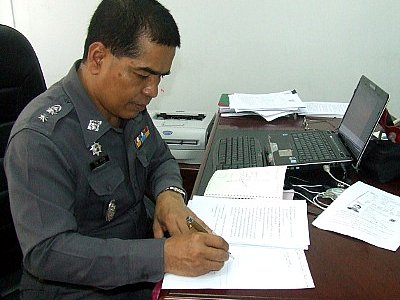 PHUKET: Police have stressed to the Phuket Gazette that they have not identified the alleged accomplice of Tommy Viktor Soderlund, the man being sought for the murder of Swedish national Maksim Schantz last night.

The Swede in question was arrested along with Soderland and five others in a raid on the Viking Internet shop in Pattaya in February this year.

The arrested Europeans allegedly used the internet cafe to make calls to victims in Norway and Sweden, duping them into wiring money to the gang’s bank accounts.

They allegedly swindled victims into wiring as much as 10 million baht, Gazette partner newspaper The Nation reported.

Col Jumroon stressed that none of these men have been identified by anyone as a suspected accomplice to Soderland in the slaying.

Police are now on their way to show witnesses copies of the gang’s passport photos in the hope of someone recognizing the accomplice among them, Col Jumroon said.