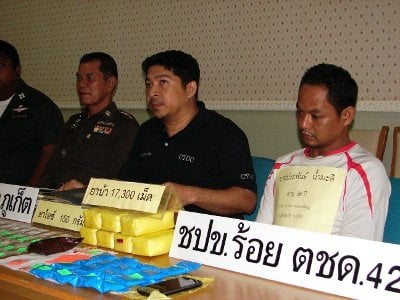 PHUKET: Police believe they have made a major breakthrough in breaking a Phuket drug delivery chain that leads all the way to Bang Kwang Prison in Bangkok.

A provincial anti-drugs task force together with Border Patrol Police from Takuapa in Phang Nga arrested Prapan “Ae” Nammali during a sting operation in Saphan Hin Village on Sunday night.

The arrest was made at 8pm and Mr Prapan, who is from Nakhon Nayok, was presented to the media at a press conference yesterday.

Mr Prapan, 36, told police that he collected drug shipments from “Mr Bas”, who delivered them personally from Bangkok by bus.

The most recent delivery, his third shipment received, totaled 30,000 ya bah pills and one kilogram of ya ice with an estimated street value of more than five million baht.

Mr Prapan, who recently lost his job as a hospital orderly, explained that he was hired as a distributor after police arrested “Mr Aod”, who was found in possession of 30,000 ya bah pills on May 12.

After he sold each shipment, Mr Papan contacted “Mr A”, who he named as the ringleader behind the deliveries.

Mr A would organize for money to be transferred to Mr Prapan’s bank account: 30,000 baht for each of the first and second shipments, and 40,000 baht for this latest delivery.

Mr Prapan said Mr A was currently serving a prison sentence at Bang Kwang Prison in Bangkok, which was handed down following his arrest in Kathu in 2005 for being in possession of 4,000 ya bah pills.

“Right now, drugs permeate all 138 communities in Phuket. They are even in schools. So drugs are now a serious matter that urgently needs suppression,” he added.