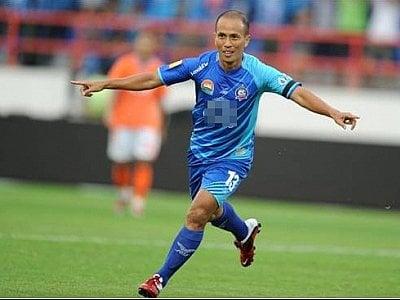 PHUKET: Thailand Premier League midfielder, Therdsak Chaiman, will be in Phuket on Saturday, July 30 to conduct the “Bend It Like Therdsak Football Clinic” at Thanyapura Sports and Leisure Club (TSLC).

Therdsak, who plays for Chonburi FC and has captained the Thailand national team, will coach players on improving techniques and how to play together on teams more effectively.

The clinic has been organized with the help of Thanachart Bank Public Company Limited as part of their initiative to support community-minded goals.

“This football clinic gives an exclusive opportunity for young players to train and play without charge with their football hero Therdsak Chaiman, who is keen to promote football on Phuket and to develop the athletic skills of the island’s young players,” said Mr Nophadon Ruengchinda, Executive Vice President of Thanachart Bank Public Company Limited.

“Thanachart Bank supports these community-minded goals and are proud to jointly welcome a true Thai sports hero to TSLC,” he added.

Vice-President of TSLC, David Roberts said the clinic was an important part of their own commitment to providing value for members in community.

“This will not be a one off event, as we have many programmes planned for children and adults,” he said.

“Having Thanachart Bank as a partner for this event has been fantastic as they have been instrumental in getting Therdsak to participate. It should be a rewarding morning for all of the children who participate”

This hands-on clinic for players aged between 12 and 16 at TSLC with a genuine star of the sport will be conducted from 8am to 10am. Submission deadline is July 28.