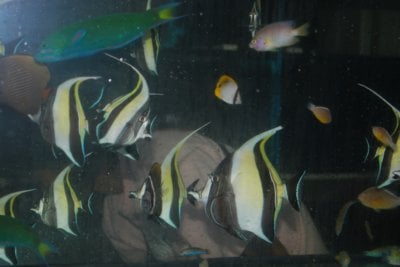 Police said the owner of the house, Suthee Sirisaringkarn, hired local fishermen to illegally catch the fish, many of which were worth up to 2,000 baht each.

Around 200 living coral blooms and around 400 tropical fish and other creatures were found in tanks in the house, including butterflyfish, wrasses, parrotfish, damselfish, angelfish and giant clams.

Mr Suthee, 34, from Bangkok, told police he planned to send the creatures to Chiang Mai to sell to collectors.

He has been charged with possession of protected species and possession of tropical fish without permission from the Ministry of Natural Resources and Environment.

All of the seized creatures are being kept by the Department of Marine and Coastal Resources at its center at Cape Panwa.

“They caught most of them at the coral reefs around Koh Racha and Koh Khai,” he said.

Mr Prajuap said this kind of poaching ring had been uncovered many times before but arrests were rarely made because it was difficult to get the evidence required to get a search warrant issued by the court.

Another DMCR staff member said some of the fish were sick with cyanide poisoning.

“Some of them are dying because whoever caught them used cyanide to stun them so they’d float to the surface and be easy to catch,” she said.

Meanwhile, in an unrelated case, a man was arrested on Wednesday night in Phang Nga province for attempting to smuggle coral blooms.

Takua Pa Police received a tip-off that the man had boarded a bus heading to Bangkok at Takua Pa bus station with a foam-wrapped crate containing the coral.

Police arrested the man and have charged him with illegal possession of protected species.

More than 180 coral blooms were recovered, including anchor coral and cup coral.