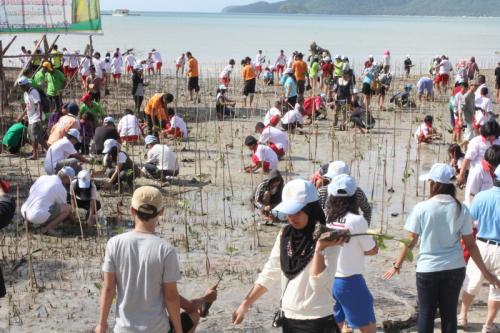 A total of 24,000 seedlings were planted over about 47 rai of land in the Klong Mudong area of Chalong.

The mass planting was the third held in Phuket as part of a nationwide campaign to plant 800 million trees by 2016 in celebration of Queen Sirikit’s 80th birthday, which was celebrated on August 12 last year.

“The aim of the project is to urge people to preserve and protect the forest and other natural resources,” Mr Kasem explained.

Governor Maitri reminded the participants – especially the government officers – of the importance of preserving mangroves.

“Mangrove forests are an important part of Phuket’s coastal ecology that are being threatened by the development of tourism,” he said.

“It is important to preserve and protect natural forests, including mangroves, from being damaged. Every department needs to work together to preserve the valuable natural resources of the island forever,” Governor Maitri said.