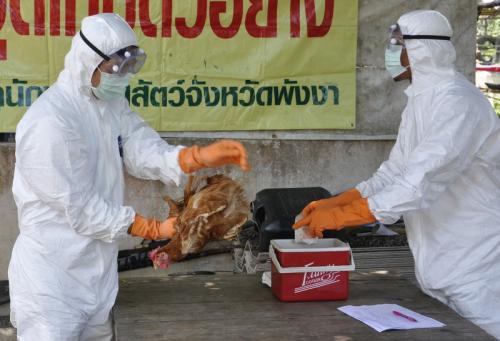 “Phang Nga is a well-known tourist destination. A lot of tourists come from China, where a new strain of bird flu is spreading,” said Kuraburi District Chief Manit Pianthong.

“About 35 Chinese have died in roughly six weeks from this new strain,” he added.

The exercise simulated an outbreak in a small village.

“Officials rushed to the area to inspect the situation, spray chemicals to kill the virus and rescue villagers by taking them to hospital,” Mr Manit explained.

Phang Nga has held rapid-response drills since 2007, following the outbreak of the H5N1 virus in 2003.

“In 2004, bird flu spread throughout Phang Nga and we had to slaughter more than 10,000 birds,” Mr Manit recalled.

The World Health Organization (WHO) announced in 2011 that it had recorded a total of 566 confirmed cases of people infected with bird flu. Of those, 332 people had died.

“Each year we stage the drill in a different district. This year it was Kuraburi’s turn,” Mr Manit said.

“The drill went very well. Although we have yet to find a bird flu strain that is transmitted person-to person, we are well prepared in case it happens,” he added.