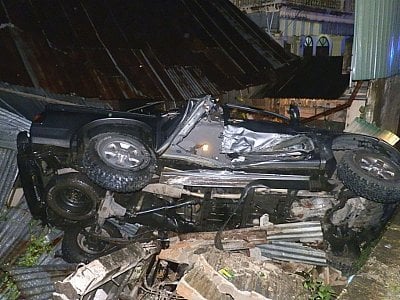 PHUKET: A man who crashed his pickup though a guard rail and into a home on Thepkrasattri Road early this morning crawled from the wreckage completely unharmed.

Thalang Police were notified at 2:30am of a crash on Thepkrasattri Road southbound near the Tah Reua Chinese Shrine in Srisoonthorn, Thalang.

Arriving at the scene with rescue workers, police found a modified black Isuzu Hilander pickup crashed into the kitchen of a roadside home on a curved stretch of road that has been the site of numerous accidents in recent years.

This latest accident took down several meters of heavy-duty guardrail.

The driver, who appeared to be in his late 30s, crawled from the wreckage unharmed and was taken to Thalang Police Station for questioning.

The driver told officers at the scene that he was on his way back to his home in Muang District after dropping a friend off at the nearby Heroines’ Monument.

Fortunately nobody was in the kitchen, which was demolished by the truck.

The homeowner, who declined to give his name, told the Phuket Gazette that the accident was the “last straw”. He now intends to abandon the property because so many accidents happen there.

A rescue worker at the scene said the trucks over-sized tires and elevated chassis probably made it unstable and the driver lost control in the rain. The tires also appeared to be worn out.

The driver did not appear to be under the influence of alcohol, he said.