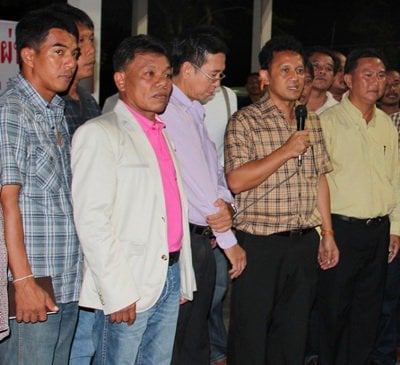 PHUKET: Srisoonthorn Municipality have set up an ‘earthquake monitoring center’ after discovering that Thalang was at the epicenter of the recent aftershocks that rattled Phuket.

The center aims to provide accurate information and to warn local villagers in the case of an emergency, said Srisoonthorn Mayor Worawut Songyot.

“The earthquake monitoring center has been established to coordinate efforts in the event of future quakes,” Mayor Worawut said.

“We will use village headmen and community leaders in the area as sources of information for our center and as conduits of communication with locals. They will be able to communicate with the center by radio to provide the center with detailed information about earthquakes [in the area],” Mr Worawut said.

“Villagers will be educated on what to do during an earthquake and how to handle the situation,” he added.

The decision to open the center follows Srisoonthorn Municipality receiving Thai Meteorological Department (TMD) research data that indicated that Thalang was the epicenter of 4.3-Richter earthquake on Monday and the aftershocks that followed, Mayor Worawut explained.

More than 200 houses were damaged by the recent earthquakes, according to a report given to Phuket Vice Governor Chamroen Tipayapongtada by the Srisoonthorn Municipality.

“We are now providing help to people who were affected by the earthquake, especially in the epicenter area around Srisoonthorn,” said V/G Chamroen, who presided over the opening of the center on
Wednesday night.

“In addition to the houses damaged in Srisoonthorn, we have also received reports that many houses in Pa Khlok were damaged. A team of inspectors will assess the damage there,” he added.

Phuket gears up for opening of new bus terminal