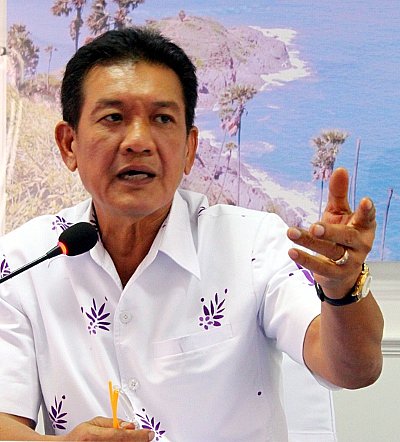 PHUKET: The Phuket Land Transport Office (PLTO) is in the process of negotiating set fares for all forms of local transportation that will operate out of the new Phuket bus terminal in Rassada, which will open on Saturday.

“We will set standard fares for all types of local transportation, with tickets that passengers can buy at a counter in the terminal,” said PLTO chief Teerayut Prasertpol.

“We have created a management system to ensure that only taxis, tuk-tuks and motorbike taxis that are legal and registered with the PLTO will be allowed to wait at ranks based inside the new terminal,” Mr Teerayut said.

The Phuket Provincial Administration Organization (OrBorJor) will provide its iconic Po Tong pink buses every 15 minutes to shuttle passengers between the new terminal on Thepkrasattri Road in Rassada and the old bus terminal (Bus Terminal 1) on Phang Nga Road in Phuket Town, he added.

“It will cost 10 baht per person for the full journey, and passengers can hop off en route,” Mr Teeryut said.

“Motorbike taxi fares will start at 60 baht. Taxi and tuk-tuk operators offered to drive passengers to Patong for 400 baht, but I will discuss this with them further to try to get the price down to 250 or 300 baht, which is a possibility,” he said.

“We already had a meeting with taxi operators and they all agreed with our new system. So taxi drivers will not be hassling and grabbing passengers at the new terminal,” said Mr Teerayut.

Taxis that are already fully legal and registered to serve passengers at Bus Terminal 1 will be allowed to wait at the taxi rank inside the new bus terminal.

Illegal “black” taxis will be permitted to drop off passengers, but will not be allowed to pick up passengers up from the new terminal, Mr Teerayut said.

The 11 legal, registered tuk-tuks that operate out of Bus Terminal 1 have agreed to move to Bus Terminal 2 from Saturday on to serve passengers there.

For people arriving by private transport, the car park at the new terminal will be away from the main building and have a capacity for about 30 cars.

Inside the main building there will be a minimart, a coffee shop and souvenir shops. However, the restaurant will not be ready for the station’s soft opening on Saturday, Mr Teerayut said.

The PLTO will operate the new bus terminal before it is handed over to either Rassada Municipality or the OrBorJor.

“However, the OrBorJor might be better suited to manage the terminal because it already has a budget and their own transport management department,” Mr Teerayut said.

“We expect some problems to arise, but we are prepared to solve them,” he added.

As Bus Terminal 2 will be the new terminus for nearly all buses to other provinces, the first bus to leave the new station will depart for Chumphon, via Ranong, at 5am, Saturday.

Bus Terminal 1 in Phuket Town will continue to be the terminus for interprovincial buses to Takuapa and some other destinations in Phang Nga, and will become the new terminal for all songtaew buses serving routes within Phuket.

Phuket songtaew have long used the stretch of Ranong Road in front of the Downtown Market as their Phuket Town terminus. They will continue to stop there, Mr Teerayut confirmed.

He added that some confusion was expected during the opening days. “PLTO officers will be on duty at Bus Terminal 1 to assist anyone who is confused by the new system,” Mr Teerayut said.

Buses arriving from other provinces outside the new bus terminal’s operating hours, from 10pm to 5am, will make their final stop at Bus Terminal 1, he said.

Bus Terminal 1 is also the Phuket Town terminus for buses to and from Patong.

For more information about Phuket’s new bus terminal and the services being offered there, call the PLTO at 076-220791 during office hours or their hotline at 1584.