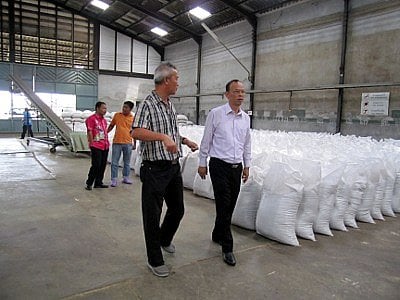 PHUKET: Phuket officials investigating a complaint about foul smells emanating from a fishmeal factory yesterday found little amiss – and now suspect that the complaint may be more about business than bad odors.

“We received a complaint letter from 46 villagers led by Miss Pongjit Ketrat on March 28. The letter charges that the Saeng Aroon fishmeal factory releases malodorous fish smells that cause some tourists to vomit and even pass out,” said Mr Prapan.

Other charges against the factory are that it fails to comply with industry standards, thus causing emissions that cause people’s clothes to reek of fish as well as serious skin conditions and other health concerns, he said.

Vice Governor Somkiet said, “We are here today to inspect the plant as part of our investigation into these charges. We need to determine whether or not this is related more to business competition, as I have been informed that the 46 complainants work for a competing plant nearby,” he said.

V/Gov Somkiet pledged to conduct the investigation impartially and to submit its findings to related agencies in due time.

Saeng Aroon manager Teerasak Tanphan said, “We have many official certificates proving that our factory meets industrial standards. This factory has been in operation for more than 20 years. Why did they wait until last month to file a complaint?” he asked.

Rassada headman Chanchai Tantawachiraphan said, “This community has been like this for years. It has always smelled this way.

“There are three fishmeal factories in the area. If villagers file a complaint, they should file a complaint against all of them. I swear that there is no problem in this community. I am the kamnan [subdistrict chief], so if villagers have any problems I should be the first to know,” he said.

Despite this V/Gov Somkiet said Ministry of Industry officials would inspect the plant to ensure it had not expanded operations outside its authorized scope.

These and investigators from other departments would be given one week to submit their findings, which would then be reported to Governor Tri Augkaradacha, he said.

Phuket Provincial Industry Office inspector Charan Nongsook insisted there were no problems with the plant.

“This factory is running legally in terms of waste management, combustion and emissions,” said Mr Charan.

Staff at the plant told the Gazette earlier that the plant had passed a Ministry of Industry inspection within the past month.

However, V/Gov Somkiet said that since the plant had been in operation for 30 years it might be in need of some maintenance. He therefore asked officials to make another inspection on a “normal working day” to check emissions then.

The Phuket Public Health Office must also inspect to determine whether the plant’s emissions are harmful to the skin. If they are, the Health Office is to invoke local regulations, he said.

The complainants wrote that previous complaints about the plant’s health effects on the community had been ignored by health officials, he added.

However, officials from Rassada Municipality said they never received such a complaint.