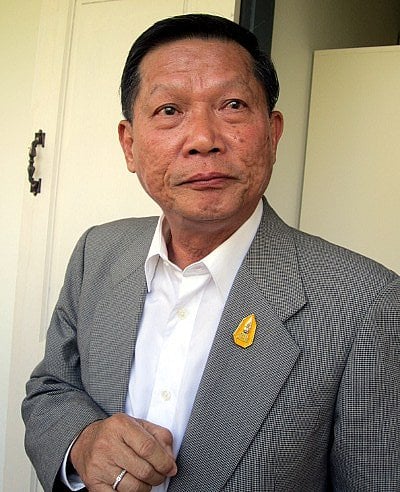 PHUKET: Local government officials and private sector groups will tomorrow finalize which projects will be presented to the Cabinet during the top-level ministerial visit to Phuket on March 19-20.

The news comes following a brainstorming session in on Tuesday.

“We discussed the monorail project, Patong tunnel project, the Convention and Exhibition Center and the airport expansion,” said Phuket Governor Tri Augkaradacha, who chaired the meeting.

Four teams have been organized to handle different aspects of the Cabinet’s visit.

“There is a planning and development team, which would present our ideas to the Cabinet. One team will provide security and another will team will ensure that the venues are prepared. Our fourth team will deal with movements and travel to ensure the Cabinet delegates can get to various locations without disruption,” said Gov Tri.

Chadej Insawang, Senate Commission adviser and a former Phuket Governor said, “An idea we would like to present to the Cabinet is for them to consider giving each province an increase in their annual budget based on the percentage of the national revenue they earn.”

“For example, last year Phuket earned a 100 billion baht. As Phuket contributed 3% to national revenue, under such a system we would receive 3bn baht.

“Another idea that we might ask the Cabinet to consider is to classify Phuket as an ‘exclusive economic zone for tourism’, which would give it the authority to self-develop,” Mr Chadej said.

“Phuket is growing very quickly and the present infrastructure cannot cope with the volume of people here,” he pointed out.

“Waste management and tourism personnel development should both be considered as matters for presentation to the Cabinet,” he added.

Caretaker president of the Phuket Provincial Administration Organization (OrBorJor) Paiboon Upatising suggested that smaller projects be presented to the Cabinet, such as the Klong Koh Pee Road project in Saphan Hin and preventing annual flooding in front of Patong Hospital.

Governor Tri made it clear that just because a project was chosen to be presented to the Cabinet did not mean financial aid would be requested for it.

The monorail was one example of a project for which Gov Tri did not see a need for national government support.

“We will be asking for approval from the Cabinet to go ahead with the project, but funding will come from private-sector investors,” he said. (See ‘Chinese government eyes interest in Phuket light rail‘.)

“We will hold another meeting this Friday to finalize what will be presented to the Cabinet in March. In that meeting we will include councils from the five other Andaman provinces,” Gov Tri added.