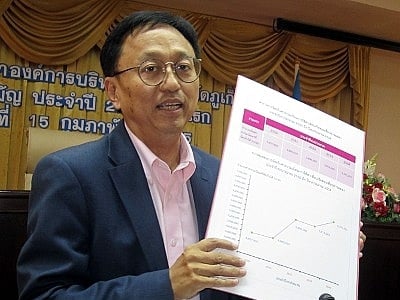 PHUKET: Paiboon Upatising, who earlier today announced his shock resignation as president of the Phuket Provincial Administration Organization (OrBorJor), this afternoon explained that his resignation is to pave the way for elections before April 20.

“I submitted my resignation to Phuket Governor Tri Augkaradacha yesterday. My term as president was scheduled to end on April 20, and elections must be held within 60 days of the end of term,” Mr Paiboon told a press conference this afternoon.

That meant that OrBorJor elections would have been held around the middle of June, but going to the polls early would give the OrBorJor enough time to form a council and ensure that major administration tasks continue smoothly, Mr Paiboon said.

“There are many OrBorJor projects that must carry on. For example, the OrBorJor hospital contracts with doctors and nurses will end in June and preparations for the Youth Games need OrBorJor involvement.

“We should have a new OrBorJor council by May to continue the contracts, otherwise the hospital will have to close. Also, the budget for the next fiscal year must be filed by October, otherwise there will be delays in securing funding for major projects,” he explained.

Mr Paiboon added that he preferred the OrBorJor elections to be held early because he foresees delays in holding the elections.

“There are problems with the constituency boundaries because of the imbalance in the increasing number of people in each voting district. The boundaries must be changed to redress this problem before the election can be held, and I have heard of no progress about this,” he said.

Mr Paiboon cited problems in redrawing constituency boundaries as causing delays in holding elections in both the Rawai and Chalong municipalities.

“They have not had mayors for more than six months. This is causing a lot of problems, and all because of problems in redrawing the constituency boundaries.

“Many important decisions have not been made because the position of the mayor [in Rawai and Chalong] is empty. Election dates have not even been set.” he added.

Mr Paiboon denied that going to the polls early gave him an advantage against other potential candidates.

“Every coin has two sides. I have explained my true reason for my resignation. People can make up all sorts of reasons, but I am standing by what I have said,” Mr Paiboon said.

Mr Paiboon was confident that Phuket voters will re-elect him for a second term.

“Looking back at the past four years that I have held office, I believe Phuket residents will give me another chance,” he said.

“Now it is up to the Phuket Election Commission to set the date for the OrBorJor elections to be held, he added.