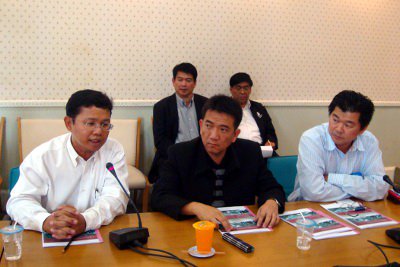 PHUKET: A state enterprise from the People’s Republic of China is the latest party to express interest in investing in Phuket’s light-rail project.

An administration and engineering team from Mashucon Co Ltd announced the news in a meeting with Phuket Governor Tri Augaradacha at Provincial Hall yesterday afternoon.

Executive Chairman Nopphon Tansakul told the governor that his team came on behalf of the Shanghai Association of International & Technological Cooperation, a Chinese state enterprise based in Shanghai.

“The Chinese government is interested in Phuket’s light-rail project. Our company has been assigned to meet the Phuket Governor and to relay that we [Mashucon company on behalf of the Chinese government] are ready to support the project, whether in terms of financial investment, technology or personnel,” Mr Nopphon said.

“We will conduct new surveys and designs for the entire project. Shanghai is prepared to offer its full support if Phuket approves of us proceeding with the light-rail project,” he said.

“The results of the study conducted several years ago is outdated, and the technology has since changed,” he added.

“For a [new] detailed study, we expect to use a budget of US$3 million, or about 100mn baht, and we expect the entire project to take about five years to complete.

“Since the Chinese and Thai governments have close relations, the Chinese government is prepared and delighted to invest in mass transit and infrastructure [projects] in Thailand, including Phuket’s light rail,” he stressed.

Mashucon Managing Director Suwichien Pongnailert told the governor that under their proposal two companies under the Shanghai Association of International Economic & Technological Cooperation will lead the investment.

Although he did not name the companies, Mr Suwichien did reveal that they included a multinational company from Canada and another company from Beijing.

As for the type of technology and electric train, he said that a swift and modern trains similar to those used in Bangkok would be ideal for Phuket.

“The train can incorporate both elevated and underground designs in order to not disturb Phuket’s beautiful environment,” he said.

Gov Tri said, “About 13 to 14 companies, mostly from China and Korea, have made proposals to develop the light rail in Phuket. Each of the companies have high investment potential, so choosing the company is the next step.

“Phuket province will give its final approval of the project at a Cabinet meeting scheduled to take place in Phuket on March 19-20.

“The project needs to be a modern mass-transit system in order to solve Phuket’s traffic congestion problems and provide one more transport option to residents and tourists.

Phuket province previously hired consultants to conduct a study, of which the results outlined seven routes. Two of these are most urgent, including the Phuket Airport to Chalong Circle and the Phuket Town to Patong routes, he said.

“Since the budget would be at least 10 billion baht, the province needs the private sector to invest in it,” Gov Tri said.