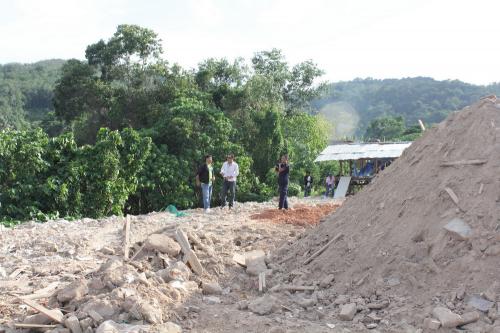 PHUKET: The Phuket Land Office will be called on to answer how three Nor Sor 3 land-use documents came to be issued for “plots” within a protected mangroves site on the outskirts of Phuket Town.

Land had been cleared in preparation for major construction.

What was planned to be built at the site was not made clear.

“When we arrived at the scene, we saw a backhoe resurfacing the land. Another two diggers and an earth roller were parked nearby,” said Paisarn Noopichai, chief of the RFD’s Deforestation Prevention and Suppression Phuket office.

The raid followed a tip-off to officials that a large tract of land among the mangroves had been cleared.

“We confirmed through satellite images that the land being developed was inside the Klong Koh Pee protected mangrove forest,” Mr Paisarn said.

“After we seized the three diggers and the earth roller as evidence, the person claiming to own rights to the land arrived and showed us three of Certificate of Use [NorSor 3] documents apparently issued for the seven rai,” he explained.

“We will ask Phuket Land Office how the three NorSor 3 documents came to be issued for land within a protected mangrove forest.

“We will also call in the person who presented the NorSor 3 documents for further questioning and ask how they came to acquire them,” Mr Paisarn said.

All recognized mangrove forests in Thailand are protected by law. Any development or construction within or on a mangrove forest must first be granted special permission by Cabinet.

Special permission is even required for government projects, such as the project to build an elevated road across the same Klong Koh Pee mangrove forest that the above developer has been found allegedly encroaching on (story here).

Urgent call for more A- blood for injured Briton in Phuket