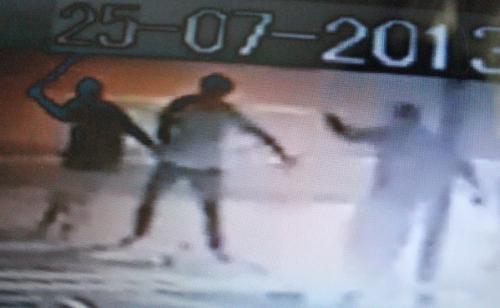 PHUKET: Police have arrested four youths for a savage attack on a man who was repeatedly beaten and hacked with a machete in Karon last Thursday, after the incident was recorded on CCTV.

“Rescue workers rushed him to Vachira Phuket Hospital. None of the attackers were at the scene when we arrived,” he said.

Karon Police checked CCTV footage, on which they saw Mr Silert being repeatedly beaten and hacked at until he fell unconscious.

After viewing the footage, police were able to track down and identify the attackers.

“When we found out who they were, we applied to the Phuket Juvenile Court for arrest warrants, because of the ages of three of the suspects,” said Col Weerawat.

“They were taken to the police station and they all confessed to the charges against them,” Col Weerawat said.

Hospital staff have confirmed to the Gazette that Mr Silert is no longer in critical condition.

“He is now stable but under close observation,” the staffer said.

The attack last Thursday came on the same day Phuket City Police arrested and charged four members of a teenage gang for attempted murder after a Burmese man was seriously injured in a knife attack in Phuket Town early the preceding day (story here).