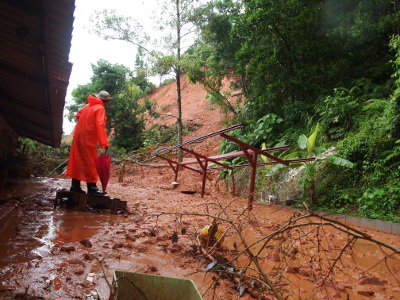 PHUKET: In a sign that the worst of the 2011 monsoon season may be behind us, Phuket authorities are preparing paperwork to revoke a landslide disaster warning for a section of the bypass road in Rassada.

The warning was put in place for a section of the bypass road northbound following torrential rains in early October that caused a landslip.

The slide forced the evacuation of several businesses and raised fears of a much greater disaster that could render the road impassable.

During a meeting at Phuket Provincial Hall yesterday, Chaiwat Taepee, the Chief Administrative Officer (Palad) at the Phuket Provincial Office, said the recent change in weather had dried out the soil in the area sufficiently to warrant lifting the warning.

Mr Chaiwat said Rassada Municipality officials had informed the Muang District Office that the danger had passed in the area, located behind the Adisak Trading Company and adjacent businesses on the bypass road.

However, the warning can be officially lifted only after the request has been approved by the governor, who was represented at the meeting by Disaster Prevention and Mitigation (DDPM) Phuket office chief San Jantharawong and representatives of the Phuket Provincial Public Works and Town Planning Office.

Mr Chaiwat said he expects such approval to come “soon”.

As for measures to shore up exposed soil in risk area to prevent a recurrence during the next rainy season, Mr Chaiwat said the owner of the land in question must present a written plan to Rassada Municipality seeking assistance in order to ensure the safety of local residents.

Such a plan could only be approved with permission of the both Adisak Trading company and the owner of the hillside land behind the Adisak plot.

A local resident who is also an environmental engineer told the Phuket Gazette soon after the slide that hillside excavation for landfill had altered natural watercourses, exposed soil and greatly compromised slope stability in the area.

Stopgap measures such as the construction of retaining walls or the application of “shotcrete” (sprayed concrete) would not be reliable long-term solutions to the slope stability problem, he said.

Such measures would only work in conjunction with an effort to reduce the gradient by removing more material at the top of the slope, he said.