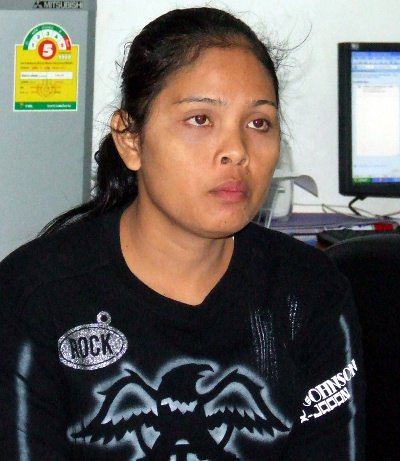 PHUKET: Phuket police have arrested yet again one of six women charged in October with luring foreign tourists to hotel rooms, where they were drugged and subsequently robbed.

Suspect Suchada Yusuk, 29, was arrested on Soi Bangla at 3:30am today.

“We had an investigation team tailing her. When she started acting suspiciously while walking along Soi Bangla, the officers stopped and searched her,” said Maj Thammasan Boonsong, head of the Patong Police Investigations Unit.

Officers found in her bag five Alprazolam pills, eight Atarax pills and a small plastic bottle containing a green-colored liquid mixture of the drugs – the same concoction used in the October arrests – and another similar bottle, but empty.

“When we brought her in for questioning, she confessed that she used [Alprazolam] to drug foreigners’ to sleep. She put the mix in their drinks and then she stole their belongings,” Maj Thammasan said.

“She always chose foreigners on Soi Bangla [as her victims],” he added.

“We are not sure if she had already robbed someone as one of the bottles we found on her was empty. We are still investigating that aspect,” Maj Thammasan said.

Suchada will be presented in court today to face a fresh charge of illegal possession of a prescription drug, he added.

Suchada’s arrest today came while she was out on bail after being arrested on October 31 with the five other women and charged with illegal possession of a prescription drug, explained Maj Thammasan.

She was to present herself to Phuket Provincial Court on December 8.

Maj Thammasan explained that Suchada, who formally changed her first name from Wanpen about five months ago, was released on bail because she is a suspect in another robbery case in which foreigners were victimized.

Her alleged accomplice in that case, Jaruni Kanpol, is still at large.

Police hoped that releasing Suchada on bail would help lead them to Jaruni, said Maj Thammasan.

Suchada and Jaruni are suspected of using the same knockout drops to drug tourists and then rob them, he added.

Officers are also keeping tabs on the other women arrested in the October 31 bust, Maj Thammasan said.

“I have heard that some of them left Phuket, but we have seen some of the others still in Patong and we are keeping our eyes on them to make sure they don’t do it again,” he said.

None of the women are now working in bars, he noted.

“Even though some of them worked in bars on Soi Bangla, we did not reveal which bars they worked at. We would like to protect the reputation of those bars, especially since the tourists were not drugged on the premises,” he added.

Three were listed as: Kemporn Pooseedin, 45, from Maha Sarakham; Saeng Nuansri, 47, from Phuket; and Wanida Yusuk, 36, from Yasothon. Each were ordered to pay fines of 10,000 baht.

As all five confessed to the charges, the court halved their fines, the Gazette was told.

All five have already paid their fines, the court confirmed.

Kemporn, Saeng and Wanida all appeared in court yesterday to faces charges of theft. They are scheduled to appear again on December 8.

Although three women were remanded to Phuket Provincial Prison and later released on bail. Maj Thammasan explained that theft charges were filed against only these three women because victims had come forward and identified them in their complaints.

During proceedings against the women, the court record noted that Kemporn, who police believe to be the gang’s ringleader, had recently completed serving a one-year jail sentence at Phuket Prison on charges of receiving stolen property.