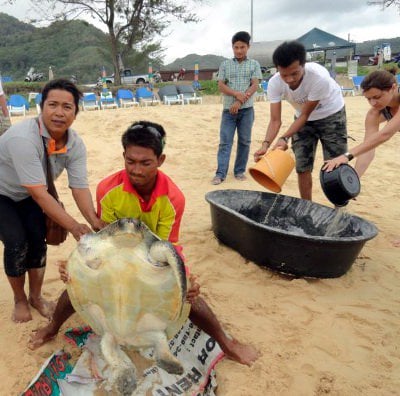 PHUKET: A turtle with one flipper severed and another suffering a deep cut inflicted by discarded fishing nets was recovered from Karon Beach yesterday.

The discovery brought to 24 the total number of turtles rescued from Phuket and Phang Nga beaches in the past two months alone.

The turtle is now being nursed at Phuket Marine Biological Center (PMBC).

Dr Kongkiat Kittiwattanawong, who heads the PMBC’s Endangered Species Unit, explained to the Phuket Gazette that, “The turtle was an adult female Olive Ridley measuring 68 centimeters long. We will administer her antibiotics and anti-inflammatory medication, just as we have done with the other sea turtles we have rescued.

“Some of them have needed operations because their flippers were cut off or cut to the bone by fishing nets, but they are all alive and receiving treatment at the center,” he said.

Dr Kongkiat said 24 adult female Olive Ridley sea turtles had washed ashore since July, with 21 of them requiring medical treatment for cuts and wounds caused by the nets.

“Some of them even lost their legs,” he said.

The remaining three are recovering from being caked in oil dumped into the ocean.

“All the turtles rescued were females ready to mate. I think there will be far fewer Olive Ridley eggs laid on our beaches this year than in previous years because we’re only two months into the mating season and already 24 turtles have been stranded,” Dr Kongkiat said.

“I have reported this to the PMBC director and asked him to launch a campaign to help stop trash and used oil from being dumped into the sea,” he added.

Scuba divers and others interested in the plight of marine life around Phuket will have an opportunity later this month to help in what may be the largest reef clean-up ever to be staged here. Details of ‘Dive Against Debris’ are available here and, in greater detail, on the organizer’s Facebook page.

The clean-up is sponsored by the Phuket Gazette and will be covered on national television (UBC/True Visions, channel 99) by the Gazette‘s new show ‘Phuket Today‘. The show airs six times per week. For the schedule, see October’s True Visions programming guide.

Phuket businesses interested in joining the Gazette as a sponsor of ‘Dive Against Debris’ are invited to contact any local PADI dive center, or Tony Andrews, Regional Manager of PADI, by email.

Phuket gets ready for tourism boom with “Big Cleaning Day’