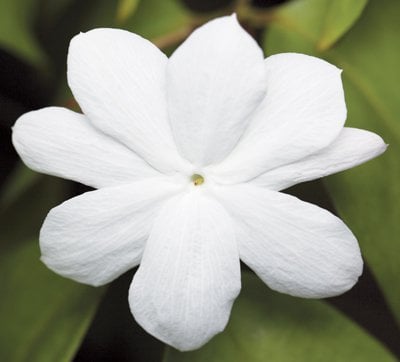 PHUKET: What do the following tropical plants have in common? Jasminum, buddleia paniculata, gardenia, murraya, plumeria, wrightia, fiddlewood, alstonia, michelia alba, cestrum nocturnum. Well, actually they have two points of similarity. One, they are all white flowering shrubs or trees; two, they are all sweet-smelling.

I have placed the jasmine first in the above list because, along with the lotus, it is the most revered flower in Southeast Asia. The national flower of both the Philippines and Indonesia, in Thailand jasmine is an essential accompaniment to most religious ceremonies, festivals and celebrations.

A symbol of motherhood, its price rockets skywards on Mother’s Day, when a kilo of flower buds will fetch 1000 baht instead of the usual 200. Perhaps it is significant that these jasmine buds form the topmost section of our floral garland. For this purpose, they have to be picked at night or in the early morning before they open and start to lose their heady aroma.

The genus is large, with some 200 species, and surprisingly, true jasmines are a member of the olive or oleaceae brigade. However, there are not only many sub-species, but an increasing number of cultivars. To complicate things still further, jasmines have been re-classified botanically, and some, previously allotted to the jasminum family, have been sent elsewhere.

But make no mistake, the one we are talking about, jasminum sambac or Arabian jasmine, is the real deal. Ask any Thai what dok mali is, and they will know – instantly. It features in most Thai gardens and hails not from Arabia but from right here.

The shrub’s appearance is not that spectacular, with smallish white blooms and oval evergreen foliage. It grows six or eight feet tall, and will tolerate a range of conditions including semi-shade, though it is averse to drought. It is propagated from seed or better, from cuttings. Currently, I am trying a couple out as house-plants, but I expect to give them the occasional outdoor reprieve.

Most hybrids, like the species, bear single blooms at the branch tips and leaf axils. “Maid of Orleans” has widely flared flowers, “Belle of India” significantly longer petals. “Grand Duke of Tuscany” has double flowers which give a rose or gardenia-like appearance. There is, however, some loss of scent.

Jasminum sambac will not only fill your evening garden with delicious aromas, it will pervade your house. The essential oil from the flowers, made from soaking the buds on cotton sheets with olive oil, provides one of the classic fragrances in soaps and perfumes. And the flowers, blended with green tea leaves, give us jasmine tea.

Jasminum officinale is not quite in the same league. But in fairness, its popular name of common jasmine is, I suspect, a reference to the fact that it is cultivated worldwide.

It was one of two jasmine varieties I was able to grow in London (the other was yellow winter jasmine or nudiflorum). It is a sprawling and somewhat twining deciduous shrub which can attain a considerable size. The flowers are often pink-tinged and the leaves are pinnate, consisting of a number of slender leaflets.

But the jasmine smell is unmistakably present, and in temperate climes can provide an exotic aroma during the summer months.

Last but not least in this trinity of jasmines is the jasminum rex. Royally named, the paan yii is also a climber with large ovate leaves, and two or three slender, star-shaped flowers with a deep center at the end of each vine.

Pure white, of course, it has the largest flowers of any jasmine – usually eight petals. Given moist conditions, it will bloom prolifically.

Sadly, the flowers possess little or no scent. Pulchritude or perfume? Up to you…

Tip of the week – Fortification through thornication
Armored shrubs are totally unsuitable for play areas, but they are great as deterrents.

Hawthorn hedges are still used in Britain to stop livestock invading adjacent fields of crops. The London police even issued a list of thorny plants to help protect homes from would-be burglars.

In Phuket, the home guard list is longer – no hawthorn, pyracantha (left), thunbergia, blackberry or brambles, but many others. The crown of thorns (euphorbia milii) won’t make a decent hedge, but rows of pots will form an effective barrier.

The bougainvillea (right) can be used in the same way, but is such a vigorous and dense shrub that it will rapidly form a hedge capable of being clipped. And the vicious spines, unlike the euphorbia’s, are mostly hidden beneath the foliage.

Phuket Diving: Out of the shadows ye self-reliant scuba diver

Phuket Lifestyle: Hanging out at the Monkeypod