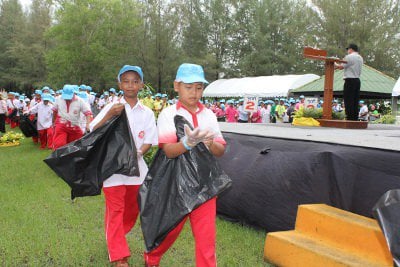 More than 500 people, including government officers, staff from private businesses as well as local students and residents, gathered at Saphan Hin Park in Phuket Town, where the Muang District Office held its activity under the banner “Giving back the clean nature to the Andaman”.

Leading the activity at Saphan Hin, Vice Governor Sommai Prijasilpa explained to participants, “The government is moving ahead with plans to promote tourism to Phuket that will see more than 12 million people coming to Phuket each year. Already, about 8mn tourists come to Phuket each year.

“Since we are the hosts of our province, we have to prepare and be ready in every aspect in order to welcome the tourists, which will be twice the number of tourists that we have now. More tourists mean more income…,” she said.

“Cleanliness is the first impression that will make the image of our province look good. Trash belongs in the bin, not on the street or elsewhere,” V/Gov Sommai added.

Meanwhile, the Phuket Gazette is proud to sponsor the “Dive Against Debris” underwater cleanup to be held on September 30.

“Come and join the largest underwater cleanup of its kind in Thailand. We’ll be Diving Against Debris, removing hazardous rubbish and surveying the rubbish,” said organizer Tony Andrews.

“This will be the biggest volunteer effort to protect our ocean that Phuket has ever seen. Want to get involved? Contact your local PADI Dive Centre,” he added.

On the day of the cleanup, participating teams will meet at Chalong Pier before heading off-island.

The event is sponsored by the Phuket Gazette, PGTV and the Phuket Today show on UBC/True Visions (Channel 99).