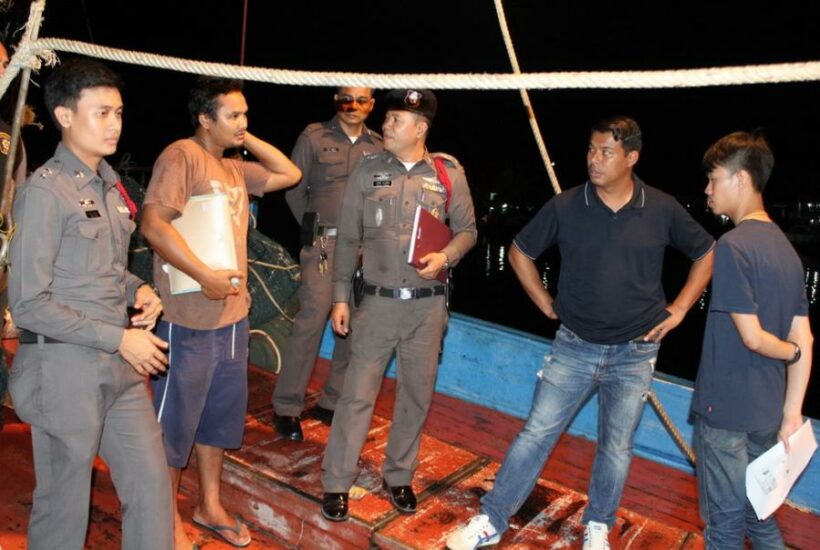 PHUKET: A fishing boat crew member was arrested for stabbing a co-worker to death last night, claiming that “constant bullying” led him to do so.

“The incident occurred at about 10pm at Rassada Pier on a fishing boat named Chok Veerachai. We found the body of Pornchai Wongkan, 42, lying inside the boat, covered with blood,” said Lt Col Rachan Panwai of Phuket City Police.

“He had several stab wounds on his body, including on the chest, shoulder, neck and back,” he added.

“Other crew members told us that the boat had been parked at the pier since 11am after they returned from a fishing expedition with five Thais and one Myanmar crew member on board. Three men, all Thais, remained on the boat while the rest left for home,” said Col Rachan.

The ones who remained behind were the victim, the suspect Chatree Khumsook, 29, and a witness Prasert Janchoti, 42.

“According to Mr Prasert, he and Mr Chatree were drinking on the boat while Mr Pornchai was sleeping. At about 9:30pm, Mr Pornchai, who was the suspect’s supervisor as well as his relative, came in to discuss some work-related matters. Mr Prasert also told us that there had been animosity between the two in the past and that the victim was known to constantly rebuke and criticize the suspect,” said Col Rachan.

“Their discussion turned into an argument, so Mr Chatree stabbed Mr Pornchai in a fit of anger and ran away.”

Police waited at the scene in case the suspect returned, which he did at about 11:40pm.

“We arrested Mr Chatree when he came back for his clothes. He confessed, adding that he saw red because of the victim’s constant criticism. He was taken to Phuket City Police Station for further legal processing,” said Col Rachan.