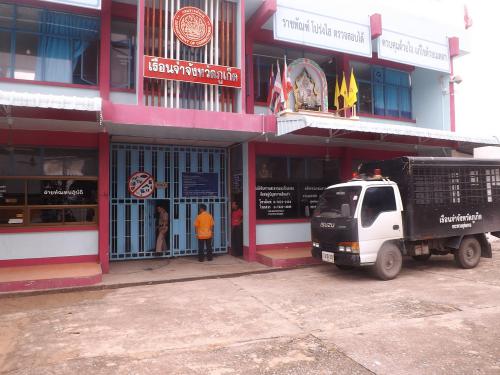 PHUKET: British national Lee Aldhouse, sentenced today to 25 years in jail for the murder of American Marine Dashawn Longfellow in Phuket in 2010, is happy to serve his jail term in Thailand, the Phuket Gazette was told today.

The Phuket Provincial Court sentenced Aldhouse, known in Muay Thai kickboxing arenas as the “Pitbull”, to 25 years’ imprisonment for the stabbing murder at 11am today (story here).

“The court found Mr Aldhouse guilty and initially gave him a life prison sentence, but that was reduced to 25 years due to his confession,” Kampon Siriwatanyoo, the lawyer representing Aldhouse, told the Gazette outside the court this morning.

Aldhouse has one month to appeal the sentence, Mr Kampon confirmed.

“He has yet to decide whether to file an appeal,” he said. “However, he will he have to contact his embassy to find a new lawyer to conduct the appeal as I have no further involvement in the case.”

In the meantime, Aldhouse will remain incarcerated at Phuket Prison.

“The Department of Corrections have yet to determine which prison will detain him,” Mr Kampon said.

“But he has told me that he is happy to serve his time in a prison in Thailand. Even though he has the right to ask for be detained in the UK, he said he does not want to be transferred back to his home country for the time being.

“Mr Aldhouse said there are many good activities for him to do in prison and the prison officers always hold behavior-development training,” Mr Kampon explained.

“He has a new community there and that can help him improve his behavior,” he said.